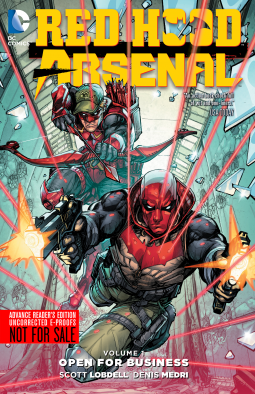 From the publisher: Red Hood and Arsenal are open for business! After working for the mysterious Tara Battleworth as on-staff outlaws, Roy and Jason have decided to branch out on their own as freelance problem solvers, investigators, and general butt-kicking specialists. But when the sinister corporate scourge of Underbelly rears its ugly head, can our heroes overcome pure evil and corruption made manifest? Collects RED HOOD/ARSENAL #1-6.

Scott Lobdell's Red Hood/Arsenal Vol. 1: Open for Business is a purely entertaining book. He has created a perfect buddy hero book, in the vein of Lethal Weapon. That's high praise because I found those movies to be great fun, particularly the interaction between Mel Gibson and Danny Glover. Lobdell has captured a similar vibe with Arsenal as the Mel Gibson comedian with a bittersweet past, and Red Hood as the ultra-serious Danny Glover.

After splitting up as a group (the Outlaws, with Starfire), Red Hood and Arsenal are drawn back together when they both happen to show to save a senator and his "fixer". Arsenal talks Red Hood into becoming heroes for hire, and the adventure and hilarity ensues. Along the way, they encounter a new villain called Underbelly (very Jabba the Hutt) and a group of mime assassins (yes, I said mimes). Additionally, they make a trip to Gotham where they encounter the new Batman. This makes for an interesting situation with Red Hood, as he deals with his Batman issues.

Through it all, the two heroes keep up a constant stream of chatter, which is where the book shines. Lobdell has the voices of these two guys down perfectly, with Roy (Arsenal) Harper trying to keep everything light and constantly needling his partner, and Jason (Red Hood) Todd all about business and acting like he's had enough of Roy's shenanigans. However, they work together wonderfully and have a strong friendship that is the emotional hook for the series.

The humor is also clever. The phone number for Red Hood and Arsenal is 555-Red-Arse. Red Hood has the line of the book when he refers to his past in "Batman's Robin intern program".

Read Red Hood/Arsenal Vol. 1: Open for Business. It's a lot of fun, and it's not too heavy. I would recommend it to fans of Lethal Weapon, and former sidekicks trying to make it on their own.

I received a preview copy of this book from DC Comics and Netgalley in exchange for an honest review.
Posted by Scott at 6:35 AM