We Are Robin Vol. 1: The Vigilante Business by Lee Bermejo - Book Review 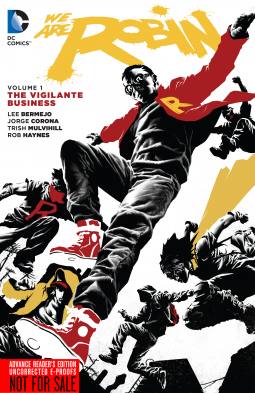 From the publisher: Spinning out of the pages of BATMAN! The teenagers of Gotham City have adopted the "R" and made it their own. A new Robin? No, hundreds of new Robins! The Boy Wonder has inspired a movement in Gotham, where different people of all creeds, colors, genders and religions have donned the "R" insignia to combat crime. But will this clean up the city...or make more trouble than it's worth? Don't miss the start of this new series from rising star writer Lee Bermejo (JOKER, SUICIDERS).
Collects WE ARE ROBIN #1-6.

Lee Bermejo's We Are Robin Vol. 1: The Vigilante Business is a cool book. In the wake of Dick Grayson being "killed" and the Joker's Endgame attack, many teenagers around Gotham have been recruited by the mysterious Nest to become a "Robin". These young heroes become involved in many things, including simple purse-snatchings and breaking up fights to deactivating bombs and trying to stop a group of brainwashed/cult-like homeless people living in the subway tunnels. Along the way, they have a run-in with the new Batman, find support with Batgirl, and face a tragedy among their ranks.

Bermejo has done a good job developing a different kind of superhero book, with the focus more on the hero than the super. The characters are varied and interesting, not merely knock-offs. They are given their own personalities and backstories, which adds depth to the story-telling. The guest appearances also serve to ground We Are Robin firmly in the Batman universe, but also give it room to breathe and become it's own entity. Additionally, the mystery of who Nest is and why he is recruiting Robins is also allowed to grow and develop.

I really enjoyed We Are Robin Vol. 1: The Vigilante Business by Lee Bermejo. It's a fun and different book. I recommend it to fans of the Batman group of books, but who lean more towards the Batgirl/Gotham Academy type (not the same old, same old type of stories).