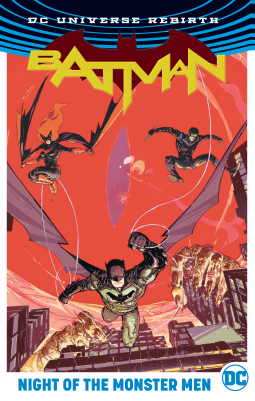 From the publisher: The first Batman crossover of DC Rebirth is here in BATMAN: NIGHT OF THE MONSTER MEN!

It’s the storm of the century, and it’s headed straight for Gotham City. The guardians of this sprawling urban center—Nightwing, Batwoman and the Batman himself—think they’ve prepared for the worst.

They have no idea.

Thanks to the machinations of the macabre scientist Dr. Hugo Strange, the storm has unleashed a rain of monsters upon the city. Colossal creatures are stomping through the streets, terrorizing the citizens and challenging the skills of even Gotham’s greatest heroes.

Can the Dark Knight and his allies stem the tide of destruction? Or will the Night of the Monster Men mark the fall of the Bat?

Night of the Monster Men, by various writers, is the first Batman crossover since Rebirth started. And overall, it was entertaining. A quick summary: Hugo Strange has developed a serum that creates monsters. These are Godzilla type monsters and they began to run rampant. To make matters worse, a hurricane is threatening to hit Gotham. Batman and Batwoman gather their team (Spoiler, Orphan, and Clayface), and enlist Nightwing to help them defeat the creatures and save Gotham. What starts out as a relatively simple mission turns out to have a deeper meaning and possible long-term repercussions.

I enjoyed this as a crossover event. It basically spanned one night, and taking two issues from each of three different comics wasn't a huge departure for any of their regular storylines. Additionally, it was fun to see Batman take on literal monsters as opposed to the more figurative type he usually battles. I thought the character interactions were terrific: Gotham Girl and Nightwing, Batman and Batwoman, Duke and Alfred, and Orphan and Spoiler. Clayface is also becoming a very intriguing character as he continues to try to be a "good" guy. The writers are coming up with some new and unique opportunities for him to show some new uses for his abilities. I also liked the concept of the Wayne Watchtowers; they absolutely need to become a recurring thing.

As far as villains go, I think Hugo Strange has potential. With his psychology background and his willingness to misuse science, he could be a very formidable adversary for Batman. This story did a nice job of pushing that idea.

Batman: Night of the Monster Men is a fun and entertaining book. It is a decent place for new readers to begin, but it will definitely appeal to Bat-fans. It also seems to be setting up events for future books down the line.

I received a preview copy of this book from DC Comics and Netgalley in exchange for an honest review.
Posted by Scott at 4:12 AM