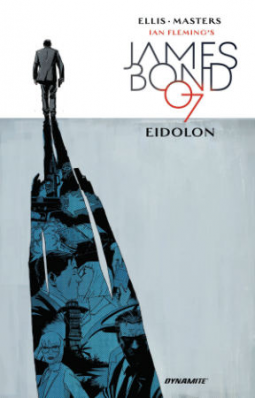 I'm really enjoying these new James Bond graphic novels. With Vol. 2: Eidolon, Warren Ellis has written another entertaining Bond tale. When an undercover MI6 agent needs to be escorted from Los Angeles back to London, James Bond is given the assignment. However, what appears to be an easy job quickly turns bad. Bond and the agent are attacked on their way to the airport, and thus begins a race to discover a hidden Spectre cell, one with sleeper agents in multiple intelligence agencies, including MI5, Britain's answer to the FBI. As Bond and friends track hidden funds and off-the-books weapons caches, the tension mounts. Will they be in time to stop an episode of domestic terrorism?

Ellis does a great job capturing the characterization of the James Bond stories. There is humor, dry wit, action, emotion, and consequences. Bond, Moneypenny, and  M are portrayed quite well. The villains, in this case Spectre agents, are sufficiently threatening. Their leader, Beckett Hawkwood, has an interesting backstory, and fits in with other Bond villains.

As I said about the previous volume, VARGR, Ellis has done a nice job creating a logical extension of the Bond stories and the more recent movies. I highly recommend James Bond Vol. 2: Eidolon. If you are a James Bond fan, this is a fun ride. Additionally, it can be read independently of the previous volume, as it contains a complete story.

I received a preview copy of this book from Dynamite and Netgalley in exchange for an honest review.
Posted by Scott at 12:04 PM