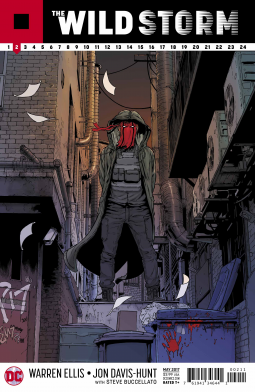 From the publisher: All Angela Spica did was save someone’s life. And now hers is over. The rogue engineer lies bleeding in a place she hopes nobody will find - but she’s wrong. The people embedded in the secret power structures of the world are tracking her. Skywatch. Halo. International Operations. A covert operative called Grifter.

If only she hadn’t unknowingly foiled an assassination planned by her boss. If only her boss wasn’t the one person more interested in the Engineer’s transhuman implants than in her life.

The Wild Storm #2 continues setting the table for the story Warren Ellis began with issue #1. The general storyline consisted of various groups looking for Angela Spica, who transformed/changed/became so kind of techno-organic being to save a life. The groups looking for her include Halo, Skywatch, and IO. As they all try to track her down, it becomes apparent that there is some sort of conspiracy going on. Where it goes, and who finds Angela, remains to be seen in future issues.

With several of the main characters already on stage, Ellis uses this second issue to bring in Cole Cash, better known as Grifter. He was a favorite character of mine in the old days of Wildstorm comics with Image, but he wasn't nearly as interesting in DC's New 52. I was happy to see him get a fresh start, as I'm sure many old fans are. Once again, though, Ellis has dumped the reader in the middle of the story and we are left to piece things together. This is not a complaint, though. I trust Ellis enough as a writer to believe that all (or at least most) will be made clear as this series progresses. However, I'm left wondering if The Wild Storm would be better read in a collected form, rather than in small issue-sized bites. I'm left waiting anxiously for the next issue, and am excited to see where this all goes.

I would highly recommend The Wild Storm #2 by Warren Ellis. This series should be required reading for fans of the old Wildstorm comics, while the series offers a fresh starting point for new readers as well.

I received a preview copy of this book from DC Comics in exchange for an honest review.
Posted by Scott at 6:36 AM