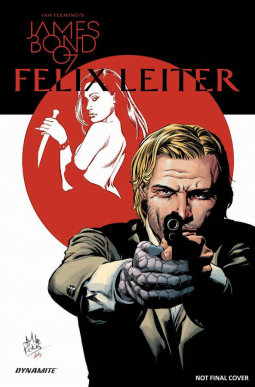 From the publisher: Felix Leiter finds himself in Japan, tracking down a beautiful, Russian spy from his past. But when the mission takes a turn for the worse, he will discover that there are more deadly schemes afoot in Tokyo and beyond! From superstar creative team James Robinson (Starman, Red Sonja) and Aaron Campbell (The Shadow, Uncanny) comes the Bond spin-off highlighting 007’s American counterpart, blending spy thrills with the dark alleys and darker deeds of crime fiction!

James Bond: Felix Leiter is awesome! James Robinson has written a winner and I highly recommend it to Bond fans and to others who enjoy a well-written ex-spy-down-on-his-luck protagonist taking on a femme fatale. It's got a very noir-ish feel to it while retaining a real sense of the bigger James Bond world. Pick it up and read it now!

Okay, I've got that out of the way. Felix Leiter was a supporting character in several of the James Bond books and movies. He's even made a couple of appearances in the new comic series. Leiter is currently ex-CIA (he has some medical issues, i.e. - he's missing some limbs and has prosthetics). He now "works" as a private investigator, which is how this book begins. Leiter has been hired by an old acquaintance, Tiger Tanaka (from You Only Live Twice), to find and identify another old acquaintance, Alena Davoff. First, Tanaka is sort of the Japanese James Bond. Second, Leiter and Davoff go back to a joint Russian/American mission involving a war on Afghanistan's heroin trade. There relationship is complicated, to say the least. While he's in Japan, Leiter and Tanaka investigate a biological terror event stemming from a cult. The plot thickens from there.

I've read nearly every Fleming James Bond story and seen nearly every movie, and enjoyed them all on one level or another. However, I found I knew little about Felix Leiter. And I've got to say, I find him an interesting and fun character. The voice Robinson has given him is very much in the old noir detectives style, minus the slang. Leiter is very self-effacing but ready to take on anything. He knows what his strengths are, yet finds he often overestimates his abilities. He is a complicated man, living with the knowledge of the spy he used to be, and the physically broken P.I. he is now. Altogether, this makes him a terrific lead character and narrator.There is also room for character growth, which sets him apart from James Bond.

Robinson also does a nice job fleshing out the supporting characters, like Tanaka and Davoff. They are believable in their abilities and play vital roles in the story. Robinson has also provided a couple of nods to the traditional Bond tale, and has set this story very much in the Bond world of Warren Ellis's comic stories.

Further, because this is a collected edition, there are several bonuses. Various covers are collected in the book, as well as the script to issue #1, and an interview with James Robinson.

To echo my earlier statements, I really enjoyed James Bond: Felix Leiter by James Robinson. It was fun, exciting, and entertaining. I look forward to seeing where this character goes in the future.

I received a preview copy of this book from Dynamite Entertainment and Netgalley in exchange for an honest review.
Posted by Scott at 6:02 AM