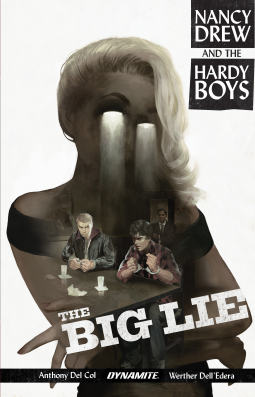 From the publisher: A Nancy Drew and Hardy Boys mystery unlike any other you’ve ever read! When the teenage brothers Frank and Joe Hardy are accused of the murder of their father – a detective in the small resort town of Bayport – they must team up with Nancy Drew to prove their innocence (and find the real guilty party in the process) in a twisting noir tale, complete with double-crosses, deceit, and dames. Writer Anthony Del Col (Assassin’s Creed, Kill Shakespeare) and artist Werther Dell’Edera (Batman: Detective Comics, House of Mystery) bring the iconic teen detectives into the modern age, and redefine noir for a new generation of readers!

As a kid, I read every Hardy Boys book I could get my hands on. I also read a couple of the Hardy Boys/Nancy Drew team ups. I even occasionally read a Tom Swift story (no Bobsey Twins, though). I say all that in order to explain why I took a chance on Anthony Del Col's re-imagining of  Nancy Drew and the Hardy Boys for the 2010's. The book he created, Nancy Drew and the Hardy Boys: The Big Lie, follows some other recent updates of classic and beloved characters. So, as a former fan, I was interested to see what Del Col came up with. It turns out it was pretty good.

So, The Big Lie is the story of how the Hardy brothers were accused of the murder of their father, Det. Fenton Hardy, and how Nancy Drew helped them solve the mystery. However, it's much deeper than that, involving drug smuggling brothers (the Rovers), a broken relationship between Nancy and her father, Federal Prosecuter Carson Drew, the seedy underbelly of Bayport, and the mysteries that lie beneath the surface of seemingly idyllic towns. It's also about families, and quite possibly about the dreams and innocence of childhood turning into the reality of being an adult.

The mystery behind The Big Lie was interesting, and not to easy to figure out. It was an enjoyable story which sets the stage for bigger mysteries to come in future Nancy Drew/Hardy Boys mini-series. I think what I enjoyed the most, though, was the updating of the characters and their lives. The shine is definitely off Frank and Joe Hardy, and, really, Nancy Drew as well. The brothers bicker and fight, and see the world in grayer tones than they used to. They are sure not the simple, unchanging characters of my youth. Nancy is still very confident, but has lost her innocence too, through a broken relationship with her father (who used to be her best friend). It was neat seeing this more adult version of the characters, and while it's different seeing them as imperfect, it makes for a much more engaging story and allows the characters the potential to grow and change.

The other fun thing about The Big Lie is all the nods to the books these characters have been in, together and by themselves. There are allusions to solving mysteries on the beach as children, and how nothing ever seemed to change (over 100 books and the characters are still the same age). Del Col also throws in Tom Swift and the Bobsey Twins to add another nod to childhood reading.

Overall, I would highly recommend Nancy Drew and the Hardy Boys: The Big Lie, by Anthony Del Col, especially to readers who grew up with the original characters. Enjoy the Veronica Mars-ish vibe.

I received a preview copy of this book from Dynamite Entertainment and Netgalley in exchange for an honest review.
Posted by Scott at 6:41 AM