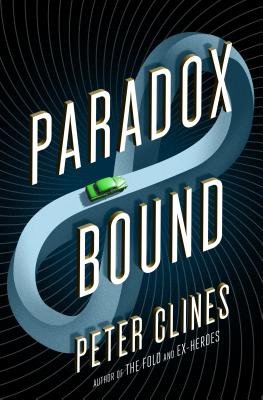 From the publisher: Nothing ever changes in Sanders. The town’s still got a video store, for god’s sake.

So why doesn’t Eli Teague want to leave?

Not that he’d ever admit it, but maybe he’s been waiting—waiting for the traveler to come back. The one who’s roared into his life twice before, pausing just long enough to drop tantalizing clues before disappearing in a cloud of gunfire and a squeal of tires. The one who’s a walking anachronism, with her tricorne hat, flintlock rifle, and steampunked Model-A Ford.

The one who’s being pursued by…something.

So when the mysterious traveler finally reappears, Eli’s determined that this time, he’s going to get some answers. But his hunt soon yields far more than he bargained for, plunging him headlong into a dizzying world full of competing factions and figures straight out of legend.

To make sense of the mystery at its heart, he must embark on a breakneck chase across the country and through two centuries of history­—with nothing less than America’s past, present, and future at stake.

I want to open by saying that I'm a fan of Peter Clines. I enjoyed the Ex- series and both 14 and The Fold. So, when I heard about Paradox Bound, I was eager to have a chance to read it. I'm glad I did, because I really enjoyed the book. There is something to Clines's writing that propels the story forward, always leaving the reader eager to discover just what happens next. Paradox Bound was much the same; the pacing of the story was great and never seemed to lag. In addition, the characters were engaging and the plot was fun and interesting.

A quick summary: Eli Teague lives in a small town in Maine, where nothing much seems to happen and nothing seems to change. He works an IT job at a bank in a neighboring city and hangs out with his friends. But Eli is waiting for something, searching, even. You see, twice in his life (when he was 8 1/2 & 13 years old) Eli encountered Harry, a mysterious stranger dressed straight out of the 1800's and driving a Model-A Ford. The mystery of who Harry was and where she was from haunted Eli. And then one night, he encounters her again and it changes his life. He joins Harry as she "history travels" in search of the American Dream. But they're not the only ones looking for it; beware the "faceless men".

Time travel stories can be tricky, so Clines stays away from that trope. Rather, Eli and Harry "history" travel, Clines's own unique take on the genre. I found his version of time travel, and the mechanics of it, very interesting. The limits, restrictions, and rules for history traveling are also logical. Part of the fun of moving through history is encountering famous or recognizable figures, and Clines doesn't forget that. Our protagonists run in to several fairly famous, or infamous, characters from American history.

Character-wise, I found Eli to be a likable main character. He is well developed and has a nice sense of humor, in addition to the wide-eyed wonder most of us would display upon discovering we can time travel. There is both nerd and hero wrapped up in Eli, and his arc finishes nicely. Harry is also a good character. She is a bit abrasive at times and there is a sense of mystery about her, but she is definitely a strong heroine. Like Eli, she too finds a nice resolution to her arc. The faceless men are fine antagonists, and the blankness of their features adds a level of horror to them. Clines also provides a clear connection between them, the search for the American Dream, and Eli and Harry. This is not just a random group of bad guys.

Clines typically writes with a bit of humor and Paradox Bound is no exception. As this is a sort of time travel story, there are no shortages of pop culture nuggets strewn throughout the narrative. I found them to be a natural fit and not forced, as can sometimes happen.

I highly recommend Paradox Bound by Peter Clines. As I mentioned earlier, I'm a fan, and this book did nothing to change my mind. If you're looking for something by Clines to try in order to see if you like his style, this book is not part of a series or connected to any other stories by him (at least as of this writing). It would make a great starting spot.

I received a review copy of this book from the Blogging for Books program in exchange for an honest review.
Posted by Scott at 6:05 AM