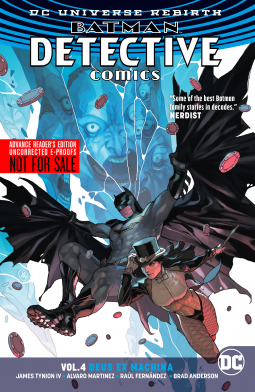 From the publisher: The Dark Knight teams with his fellow Gotham City vigilantes to protect their hometown in the newest volume of this hit graphic novel series in BATMAN: DETECTIVE COMICS VOL. 4: Deus Ex Machina!

The next big DETECTIVE arc is here! Stephanie Brown wants nothing more than to save Gotham City from the epidemic of costumed vigilantes and madmen who regularly tear the city apart. But before she can try to stop them, she must face the challenge of one in particular: the insane the Wrath is back, and Stephanie knows what he has planned--but she refuses to let Batman risk more lives to stop him. That means it's all on her...and a very unlikely ally!

Detective Comics Vol. 4: Deus Ex Machina, by James Tynion IV, continues the excellent storytelling  going on in the Batman comics. This latest volume from Tynion IV focuses a little more on the heroes making up Batwoman's team, in particular Jean-Paul Valley aka Azrael. When the new version of Azrael, known as Ascalon, comes to "convert" or "evangelize" Jean-Paul, Luke Fox (Batwing) jumps in to help save his friend. With some help from Batwoman, Orphan, Clayface, and Batman, Azrael confronts his past and paves the way for his future.

This was another terrific story. I really enjoyed Tynion IV's focus on Jean-Paul, as he is a very interesting character but not a lot has been revealed about his background. We knew he was created by the Order of St. Dumas as an avenging angel and has a strange symbiotic relationship with his costume, knows as the Suit of Sorrows, but not much more than that. Deus Ex Machina takes a deeper look into his life and sets the stage for future mysteries. I particularly enjoyed the further development of the friendship between Jean-Paul and Luke, which was strengthened as a result of this encounter. It was also nice to have Batman play a supporting, secondary role, as it let the other heroes shine more. One other thing I liked was the new Azrael suit Luke created; it had the look of Jean-Paul's Batman suit (from way back in Batman's past, when his back was broken and Jean-Paul stepped in for him). It was a nice nod to longtime fans.

The last chapter in this book focused on Stephanie Brown (Spoiler). She left the team because of the collateral damage to innocent people and is currently fighting the good fight and trying to remain off the radar. This story sets up the next major arc in Detective Comics, which should provide another interesting challenge for the Bat-team.

One note, though: The back cover copy provided by the publisher is not accurate as to the story inside. It both identifies the name of the volume incorrectly and leaves out the major story involving Azrael.

I highly recommend Detective Comics Vol. 4: Deus Ex Machina, by James Tynion IV. It should be read by all Batman fans, and would also be enjoyed by fans of Azrael from previous Batman stories (going back to the 1990's).

I received a preview copy of this book from DC Comics and Netgalley in exchange for an honest review.
Posted by Scott at 8:53 AM