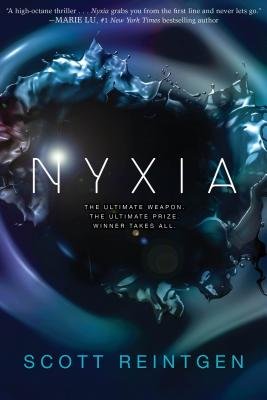 From the publisher: Every life has a price in this sci-fi thriller—the first in a trilogy—that has the nonstop action of The Maze Runner and the high-stakes space setting of Illuminae.

What would you be willing to risk for a lifetime of fortune?

Emmett Atwater isn’t just leaving Detroit; he’s leaving Earth. Why the Babel Corporation recruited him is a mystery, but the number of zeroes on their contract has him boarding their lightship and hoping to return to Earth with enough money to take care of his family.

Before long, Emmett discovers that he is one of ten recruits, all of whom have troubled pasts and are a long way from home. Now each recruit must earn the right to travel down to the planet of Eden—a planet that Babel has kept hidden—where they will mine a substance called Nyxia that has quietly become the most valuable material in the universe.

But Babel’s ship is full of secrets. And Emmett will face the ultimate choice: win the fortune at any cost, or find a way to fight that won’t forever compromise what it means to be human.

Scott Reintgen's Nyxia is a fun and entertaining book. It engages the reader from the first page and flies them through to the end, with barely time to breathe in-between. This is definitely a book I'll try to put in the hands of my middle school students.

First, a brief summary. Emmett is our point of view character. He is an African-American teen from Detroit. Along with 9 other teens from around the world, he has been chosen to compete for a spot to visit Eden, a new planet discovered by the Babel Corporation, and to basically be paid like millionaires. Babel needs the teens to mine for nxyia, a wondrous substance that can be manipulated by the mind into becoming whatever one can imagine. The Eden natives, known as Adamites, will not allow adults on the surface of the planet, resulting in the need for the teenagers, as well (this back story is necessary to explain why kids are going to Eden, but otherwise not really that important). Over the course of the journey to Eden, Emmett and the others will be pitted against each other, individually and as teams, to determine which 8 will actually be chosen. Friendships grow, rivalries form, and the very real prospect of injury or death hangs over the competitions, not to mention the chance to be financially set for life and pull their families out of poverty.

In his author's bio, Reintgen mentions that as a teacher, he discovered that "inspiration isn't equally accessible for everyone, so he set out to write a novel for the front -ow sleepers and back-row dreamers of his classrooms. He hopes his students will see themselves...in characters like Emmett." As a fellow teacher, I think he has succeeded. Emmett is a fully realized character that should appeal to all students, but especially boys. He has self-doubt mixed with a high level of self-confidence; he experiences disappointments, anger, and successes just like any kid. He is guarded and open at the same time, trying to protect himself but be known, as well. His arc is well done, with plenty of room for more growth in the coming sequel(s). The other characters are a collection of different races and genders, and are written well. They don't have the depth that Emmett has, but that may be more a function of the first person narrative than anything else. There are a few adults in the story. Defoe is the Babel Corp. supervisor, who is sketchy and untrustworthy. Vandemeer is the caretaker/doctor for Emmett and his suitemate, Kaya. They are kind of stereotypes, but fill their roles well.

The plot flew along, constantly propelling the reader forward. As the competition progresses, Emmett becomes more suspicious that all is not what it seems with the Babel Corp. There are plenty of twists and turns, and several plot twists that I did not see coming. The substance of nyxia itself is very mysterious, with more of it's capabilities being revealed as Emmett and the others move through their journey. The book ends, not exactly on a cliffhanger, but definitely with a great transition point for the next book, which I'm planning on reading as soon as Reintgen publishes it.

The publisher compares Nxyia to The Maze Runner and Illuminae; I disagree. I didn't particularly find the mystery behind The Maze Runner as interesting as Nxyia, and the only thing Illuminae has in common with Nxyia is the space setting. While reading, I found myself thinking about Ender's Game, Hunger Games, and Divergent. Ender's Game has a similar tension between teens/kids training both as allies and competitors, and the space setting is a little closer in tone than Illuminae's. The writing style and level, and the character depths, reminded me of Divergent; it was written well, but to me it didn't reach the level of a Hunger Games or Harry Potter (this is not a dig, but where the bar is set for me). The tension in Hunger Games, along with the violence, was a notch above Nxyia, but there is a clear danger and risk involved in all of the games Emmett and his comrades compete in. Reintgen did a great job for his first published novel, and now it remains to see if he can raise the bar with Nxyia's sequel(s).

I really enjoyed Nxyia by Scott Reintgen. It was well-written, engaging, and full of interesting plot points and characters. This should appeal to middle- and high school readers, especially boys who were looking for a Hunger Games or Divergent type book with a male protagonist. I'm looking forward to Reintgen's future books in the Nxyia universe.

I received a review copy of this book from the Blogging for Books program in exchange for an honest review.
Posted by Scott at 10:01 AM