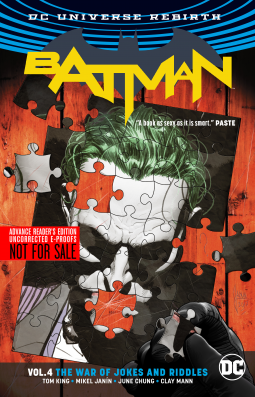 From the publisher: In the tradition of BATMAN: THE DARK KNIGHT RETURNS and BATMAN: THE LONG HALLOWEEN, the next great Batman graphic novel is here in BATMAN VOL. 4: THE WAR OF JOKES AND RIDDLES!

Zero Year. 12 months in which Gotham City was left without power, without laws, without hope. 365 days in which the Riddler ruled the streets. But once again, Batman was victorious.

In the aftermath of Zero Year? War. The Joker vs. The Riddler. They called it the War of Jokes and Riddles and it's story has been untold... until now.

Written by breakout star Tom King and illustrated by Mikel Janin, the newest installment of this best-selling, critically acclaimed graphic novel series see a flashback tale of the Dark Knight facing two of his greatest foes ever! Collects BATMAN #25-32.

Tom King continues his excellent run on Batman with Batman Vol. 4: The War of Jokes and Riddles. Following the events of Zero Year, the Joker "forgot" how to laugh, so he decided to kill and destroy even more than usual. The Riddler, in custody, was asked to help Batman and the GCPD in finding and stopping Joker. Riddler refused, then escaped and confronted Joker with a proposal: Team up and let the Riddler kill Batman. Joker said no, and the two went to war. The resulting carnage was devastating. As for Batman, he is almost secondary as he is left to try and prevent more devastation and protect the innocent citizens of Gotham.

I really enjoyed The War of Jokes and Riddles. It was a spectacular story. King deftly handled the characterization of both Joker and Riddler, raising the level of genius and crazy to extreme heights. Both are equally menacing and unforgiving, refusing to give in or bow out so that the other might have the opportunity to kill Batman. King also does a great job juggling the various supporting villains the two gather to assist them in their war. Of particular note is Kite-Man, a seemingly "C" list villain, almost a joke himself. Kite-man gets several chapters of the story to show his role in the war, and King adds a level of pathos to a formerly ridiculous villain. It is in moments like these that King's talent shines through.

With his new relationship with Catwoman, Batman decides he needs to reveal his true self to her, and that is how the story of the War of Jokes and Riddles is presented. Batman promises to tell her something that may cause her to reevaluate their relationship and the way she sees him. This provides an interesting and suspenseful framework to an already enthralling story.

Over the past 30+ issues, King has proven to be a great writer who excels in characterization. He is adding layers and depths to characters who have been around for decades (Batman, Bane, Riddler, Kite-Man). This raises his writing above the average. He has also created some intriguing plots, especially I Am Bane, but the War of Jokes and Riddles has the chance to become one of the legendary Batman arcs.

I highly highly recommend Batman Vol. 4: The War of Jokes and Riddles by Tom King. With each successive volume, King continues to raise the bar, putting himself in the discussion for all-time greatest Batman writer. This is a must for Batman fans, and because it's self-contained, it makes for a great story for anyone wanting to give it a try.

*My review copy did not include the final volume of the story, so as of this writing I'm unaware of the secret Batman promised to reveal to Catwoman.

I received a preview copy of this book from DC Comics and Netgalley in exchange for an honest review.
Posted by Scott at 6:35 AM