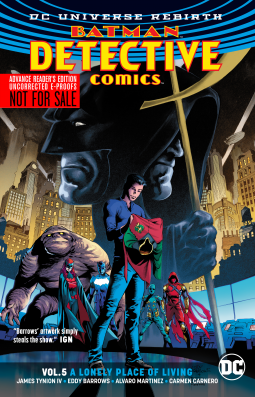 From the publisher: The Dark Knight's team of Gotham City vigilantes--including Batwoman, Clayface and Azrael--continue to protect their home in BATMAN: DETECTIVE COMICS VOL. 5!

Having exiled herself from Batman's world, former ally Spoiler has nearly destroyed herself trying to expose the corruption of Gotham City's vigilantes. Fortunately for her, help has arrived...but unfortunately for the city, it's in the form of the mysterious Anarky! Is he truly on the side of the people, or is he a dangerous lunatic?

Batman: Detective Comics Vol.5: A Lonely Place of Living by James Tynion IV is the book that brings Tim Drake back into the DC Universe. The title of the main story arc is a play off of the (in)famous A Lonely Place of Dying storyline line from the late 80's in which readers were to call in and decide whether or not the second Robin, Jason Todd, was killed by the Joker. Long story short, Todd didn't make it. So with a Robin-centric story, Tynion continues his run on Detective Comics featuring the Bat-team of heroes, including Batwoman, Clayface, Orphan, and Azrael, a team that was put in place by Tim Drake before his "death". In the wake of Tim's death, Batman resolves to search for Tim, believing him to still be alive, or at least able to be resurrected (Batman had an interesting experience along this line with his son Damien, the current Robin).

The main story has Tim confronted by a mysterious figure, who may or may not be responsible for taking him away. He eventually runs into a future version of himself who has become Batman in his timeline. The older Tim wants to change time to keep himself from becoming this more vicious version of Batman, while the younger Tim (Red Robin) wants to do what is right. Red Robin and Tim/Batman escape to Red Robin's time, where Red Robin teams up with the Bat-family, who he refers to as the Gotham Knights, in order to stop Tim/Batman. Looming over all of this is who or what abducted Tim in the first place.

A follow-up story focuses on Stephanie Brown, aka Spoiler, Tim's former girlfriend and former Gotham Knight. She has been approached by Anarky, who has created a utopia of sorts in Monstertown. Clayface also has a story, as he struggles with both how he looks and who he used to be, and whether he has any hope for redemption.

Both of these stories were okay. Tim's battle with the future Tim wasn't really that captivating to me, and there wasn't a lot of characterization. I'm not totally sure where Tynion is taking us, although its nice to have Tim back. There are also some seeds for future stories that hint at problems with some of the Bat-family of characters. Spoiler's story had a bit more characterization, but was really uneventful, all told. It will be interesting to see how Tim's return affects the personal journey she has been on since he "died", and hopefully will see that in the next volume. The most impactful story was Clayface's, as he searches for both a cure to his condition, and absolution for his past actions. Basil Karlo is a man in need of redemption, both physically and spiritually. His conversation with Mudface, a former movie colleague (and possible love interest), is especially telling and may have long term repercussions for Clayface in Detective Comics. This is a story line that I think could use some focus in upcoming issues.

I thought Detective Comics Vol. 5: A Lonely Place of Living by James Tynion IV was just okay. It brought Tim back and possibly set up some future events, but it wasn't really that engaging, especially compared to recent outings. I would recommend this volume to fans of Tim Drake or Batman completists, but its not the best standalone story to jump in with.