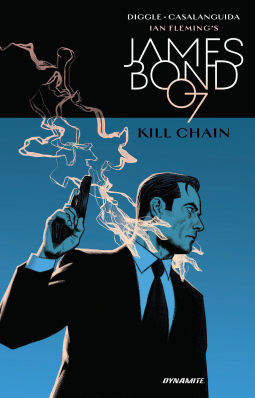 From the publisher: When a counterespionage operation in Rotterdam goes catastrophically wrong, James Bond finds himself in the crosshairs of a plot to smash NATO. Someone is assassinating allied agents, and 007 is the next target in the kill chain. Having kept the peace for decades, the old alliance is collapsing, pitting MI6 against its former ally - the CIA!

James Bond: Kill Chain by Andy Diggle is another in the excellent run of original James Bond comics from Dynamite. Diggle follows up his previous effort, Hammerhead, with Kill Chain, which seems to be less of the “megalomaniac world-conquering villain” type story and more of a return to the spycraft Bond was known for in many of Ian Fleming’s novels.

Kill Chain focuses on James Bond’s quest to track down a rogue MI6 agent named Rika Van De Havik, who appears to be working with the CIA. However, when a CIA agent and Van De Havik are killed and Bond is framed, things go sideways. Bond discovers a plot to tear down NATO from the inside, and realizes it’s the work of his old enemies in SMERSH. An appearance by Felix Leiter, Bond’s sometimes ally in the CIA, adds both clarity and a new level of difficulty to his mission: stop SMERSH from destroying NATO.

I enjoy Diggle’s take on Bond. He hits all the usual Bond ingredients: some gadgets from Q division, a nice car, a beautiful femme fatale, a deadly foe, clever dialogue, and lots of action. Along with this, he writes a realistic James Bond, one who makes mistakes and is not an unstoppable super-spy. I like my James Bond more human than some of the movies portray him, and Diggle does a great job with that. I think that it can be tough to come up with new villians and situations for James Bond, due to the sheer number of stories about him, but Kill Chain seems like a fresh and timely conflict. It’s also nice to see Bond dealing with contemporary world issues, and Kill Chain does that, as do most of Dynamite’s Bond graphic novels. And while Diggle wraps of the Kill Chain storyline, he does lay some ground work for a potential sequel or sequels. It looks like SMERSH might be back to stay.

I highly recommend James Bond: Kill Chain by Andy Diggle. It is a fun, entertaining James Bond story that captures much of what makes James Bond so iconic. Diggle did a super job with Hammerhead and has continued his run with Kill Chain.

I received a preview copy of this book from Dynamite Entertainment and Netgalley in exchange for an honest review.
Posted by Scott at 6:38 AM