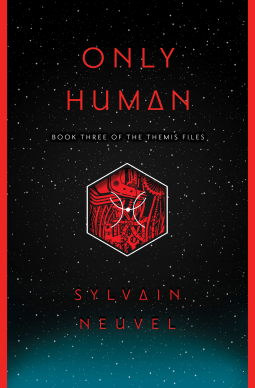 From the publisher: In her childhood, Rose Franklin accidentally discovered a giant metal hand buried beneath the ground outside Deadwood, South Dakota. As an adult, Dr. Rose Franklin led the team that uncovered the rest of the body parts which together form Themis: a powerful robot of mysterious alien origin. She, along with linguist Vincent, pilot Kara, and the unnamed Interviewer, protected the Earth from geopolitical conflict and alien invasion alike. Now, after nearly ten years on another world, Rose returns to find her old alliances forfeit and the planet in shambles. And she must pick up the pieces of the Earth Defense Corps as her own friends turn against each other.

Only Human by Sylvain Neuvel is the final book in the Themis Files trilogy, which includes Sleeping Giants and Waking Gods. Neuvel is tasked with wrapping up the story of Vincent Couture, his daughter Eva, and his former boss-turned-friend Rose Franklin as they find themselves transported to Esat Ekt, the home planet of Themis, the giant robot Rose discovered as a child. Neuvel accomplishes this using a storytelling style that relies on interviews, emails, and radio (or some sort of similar communication) conversations.

Sleeping Giants introduced Dr. Rose Franklin, Kara, Vincent, the Earth Defense Corps, and Themis (a giant robot left by an alien race). Waking Gods then tracked varying countries trying to take control of Themis. Only Human picks up ten years after the end of Waking Gods, and tells the story of the race that created Themis and what happens when our heroes want to return home.

It's really hard to summarize much Only Human, because I don't want to accidentally spoil anything. Neuvel uses his epistolary style to show what Rose, Vincent, Eva, and the General have been up to on Esat Ekt, which is where they were taken at the (cliffhanger) end of Waking Gods. The story is told with flashbacks interspersed with current events to create a full picture of the previous ten years. Suddenly, Vincent is finds he wants to try to return to Earth so his teenage daughter Eva can have a "normal" life. This idea sets off a series of events that brings the story of Themis to a fulfilling conclusion and quite capably brings the Themis Files to an end.

Over the course of three books, Neuvel has done a great job creating well-rounded and interesting characters, which to me is all the more impressive considering the style he chose to tell the story. Vincent and Rose had already been given terrific characterization, and in Only Human, Eva is given the same treatment. This characters feel very real, which is a testament to Neuvel's skill. Additionally, in Only Human, our characters find themselves on an alien world living in a culture that's a little similar to ours, but also has some fundamental differences. He does a wonderful job of fleshing out this alien world.

Of course, a giant robot story wouldn't be complete without some giant robot fights, and Only Human does not let the reader down. There are several of these conflicts (just like in the previous books) and the action and conspiracies keep the story flowing quickly.

My only real complaint (and it is minor) is that at times the moralizing seemed a little heavy-handed, something that did not really stand out in the two previous books. However, that did not prevent me from enjoying the book.

I highly recommend Only Human, the final book in the Themis Files trilogy, by Sylvain Neuvel. It is a fun and exciting conclusion to the story begun in Sleeping Giants. While the story can be read without reading the previous books, I definitely wouldn't recommend it, as readers may find themselves lacking some of the prior knowledge that would make Only Human much more enjoyable.

I received a preview copy of this book from Del Ray and Netgalley in exchange for an honest review.