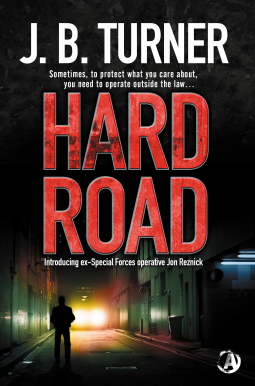 From the publisher: “Sometimes, to protect what you love, you need to operate outside the law…”

Since his wife died on 9/11, Jon Reznick has worked hard to keep his shadowy world hidden from his eleven-year-old daughter. But when he’s ordered by his handler to assassinate a man in an exclusive Washington DC hotel, he discovers the target is not at all who he at first appears to be.

Quickly ensnared in a web of murder, extortion and treachery, Reznick finds himself fighting to outwit not only the clandestine group intent on hunting him down, but also to evade capture by  FBI Assistant Director Martha Meyerstein”

But it’s not only Reznick’s survival that’s at stake. A terrifying plot by a foreign government to bring the United States to its knees is underway. And only Reznick can stop it.

As Jon Reznick questions why the details surrounding his latest hit aren't accurate, he inadvertently finds himself defending the man rather than killing him.  This sets off a string of events that lead to Reznick's daughter being kidnapped, and Jon having to drag around his potential victim as he attempts to find and rescue her.  Why he doesn't follow the orders he's given immediately after he contacts his handler, he isn't really sure.  What he does know is that his personal code of ethics alarm is going off, and he needs to find his daughter.

In the midst of Reznick's search, J.B. Turner, the author of Hard Road, begins to reveal to the reader that there is something bigger at work: a potential terror attack on the United States.  FBI Assistant Director Martha Meyerstein is intent on tracking down a missing scientist, missing vials of a virus, and the man who can create the antidote: Frank Luntz, the man Jon Reznick was sent to kill.  As Turner weaves these two plot threads together, the story comes to an exciting finale.

I like the character of Jon Reznick.  He is a flawed and broken man, with some valuable skills (he is a former Delta operator).  He is willing to bad things to help good people and his country, but there are lines he won't cross.  There is a lot of potential with him.

I liked the plot of Hard Road, too.  It was exciting and moved along pretty well.  There were crosses and double-crosses, and I was never totally sure who to trust.

It was a very cinematic book; it was easy to picture Hard Road taking place on a movie screen.  And that is where my issue is with it.  It didn't seem to break any new ground.  That's okay, as it was an enjoyable book. But, it didn't leave me thinking about it afterward.  It was just like seeing the big summer blockbuster, full of thrills and action, but with no lasting impression.

Check out Hard Road if you are a fan of summer blockbusters and are looking for an easy summer read.

I received a review copy of this book from Angry Robot Publishers in exchange for an honest review.
Posted by Scott at 9:07 AM