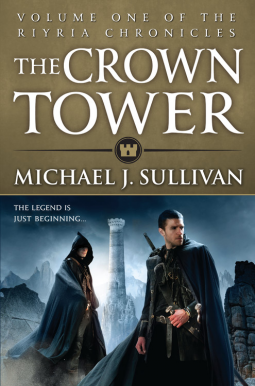 From the publisher: Two men who hate each other. One impossible mission. A legend in the making.

Hadrian Blackwater, a warrior with nothing to fight for, is paired with Royce Melborn, a thieving assassin with nothing to lose. Hired by an old wizard, they must steal a treasure that no one can reach. The Crown Tower is the impregnable remains of the grandest fortress ever built and home to the realm's most prized possessions. But it isn't gold or jewels that the wizard is after, and if he can just keep them from killing each other, they just might succeed.

The Crown Tower is the first in a series of prequels (the Riyria Revelations) by Michael J. Sullivan. The series will tell the back story of his characters from the Riyria Chronicles, Royce Melborn and Hadrian Blackwater.  This first book tells how Royce and Hadrian met and their first job together, stealing a book from the Crown Tower.  This is referenced several times in the Riyria Chronicles books, so its fun to see the tale play out.

One of the dangers of prequels is that due to knowing the characters will survive, much of the tension and suspense can be missing.  Dangerous situations tend to lose their bite.  However, Sullivan does a wonderful job creating tension not with the plot, but in the character development.  The initial Hadrian we meet is a far cry from how he is portrayed in the Riyria Chronicles.  He is fresh from his time as a soldier in the East, a little naive about city life, but still full of the integrity that makes him the moral compass of the pair.  Royce is darker, possibly even more cynical, and emotionless.  They couldn't be more different from each other.  Contrasting these two with their later versions is a fun study in character development.

Sullivan begins to pull these two together ever so slowly, revealing their layers to each other at a consistent pace. There are fits and starts as Hadrian and Royce begin to work with each other, slowly growing to trust each other and beginning on the road to understanding and friendship.

While I expected the story of the Crown Tower job and the beginning of Royce and Hadrian's friendship/partnership, I didn't expect the story of some of the secondary characters from the original series.  It was cool to read about Gwen's past and how Medford House came about.  There was a lot added here, including some clues or prophecies related to the larger story told in the Riyria Chronicles (in fact, Sullivan did a fine job leaving hints to this throughout The Crown Tower).  Professor Arcadius also plays a role that is deeper than just the man who put Royce and Hadrian in contact with each other.  With the time spent with Gwen, her girls at Medford House, and Professor Arcadius, Sullivan begins to give the reader a sense of the larger world present in the Riyria series.  This also keeps The Crown Tower from being a novella, and just a nice add-on to fans of the previous series.

On it's own, The Crown Tower is a fun fantasy novel, with interesting characters and an engaging story.  Taken in context with the Riyria Chronicles, it's even more.  Michael J. Sullivan has demonstrated how a prequel can add to the overall depth of a series without becoming cheesy or cliched.  I highly recommend this book as a starter to the world of Royce and Hadrian, but especially to fans of the original series.

I received a review copy of the book from Orbit Books in exchange for an honest review.
Posted by Scott at 8:35 AM