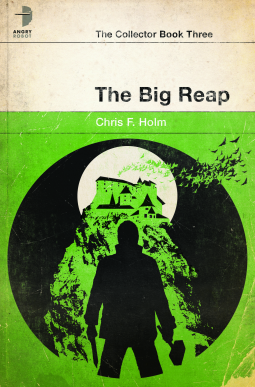 From the publisher: Who Collects the Collectors?

Sam Thornton has had many run-ins with his celestial masters, but he’s always been sure of his own actions. However, when he’s tasked with dispatching the mythical Brethren – a group of former Collectors who have cast off their ties to Hell – is he still working on the side of right?

The Big Reap is the third book about Sam Thornton (The Collector series), a man who traded his soul to save his wife.  Sam is now a Collector, which means it is his job to collect the souls of people who are going to Hell.  He isn't happy about this, nor is he happy about having Lilith as his overseer.

The Big Reap is the story of how Sam is tasked with collecting the souls of the Brethren, a group of nine former collectors who were able to escape from their jobs, granting them near-immortality and causing the Great Flood.  Sam, through no plan of his own, discovered the Brethren were actually mortal and his self-defense killing of one of them gets him the job of tracking down the other eight, thanks to Lilith.  As Sam takes over multiple different bodies, he begins a quest that turns out to be much bigger than what he thought he was getting into.

In addition to the main story, Holm also reveals Sam's death and his first assignment as a Collector: collect Hitler's soul.  It makes for a very interesting look at the end of Hitler's life.

I ended up enjoying this book quite a bit.  Holm's prose was very easy to read, almost flying by, and reminiscent of Raymond Chandler's hard-boiled Philip Marlowe stories (the titles in The Collector series are all riffs on Chandler's titles).  The action is near constant, with breaks here and there for the reader to catch their breath.

I really enjoyed the character of Sam Thornton.  He is a very conflicted man.  He is damned for eternity, but only because he sacrificed himself to save his wife's life.  He knows he has a job to do, but often runs into his own moral code and integrity.  He isn't a bad guy, he's not really a good guy; he is very much a reluctant hero.  He is quick-witted and a smart mouthed, but will do anything for his friends.

The plot description does not do this book justice.  While the hunt for the Brethren was interesting (nice little bit about how Frankstein's monster and Count Dracula came to be), it's what is going on beyond the hunt that makes the story for me.  The relationship Sam has with Lilith, as well as his friends Kate, Theresa, and Gio, grows and deepens.  In addition, Sam's meeting with the final Brethren adds depth to his character and the story as well.

Not simply a book about a damned soul working for eternity, Holm is taking Sam Thornton on a quest.  I'm not sure if its a quest for redemption, a chance to stick it to "the man", or simply a quest to help people who can't help themselves.  Regardless, it is a quest that is worth following in order to see the path Sam takes.

This was a fun book.  I would recommend it to urban fantasy fans looking for something a bit different.  There are shades of Buffy the Vampire Slayer and Simon R. Green's Nightside series (starring John Taylor), also.

I received a review copy of this book from Angry Robot Publishers in exchange for an honest review.
Posted by Scott at 8:40 AM