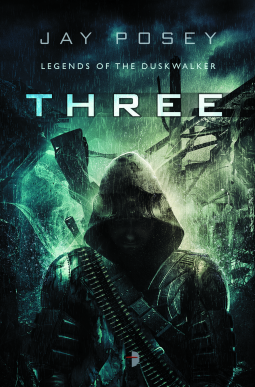 From the publisher: First book in the series: Legends of the Duskwalker
The world has collapsed, and there are no heroes any more.
But when a lone gunman reluctantly accepts the mantel of protector to a young boy and his dying mother against the forces that pursue them, a hero may yet arise.

The premise of Three, by Jay Posey, intrigued me.  I kind of like the loner-against-the-bad-guys stories.  There is something familiar about them that is right in my wheelhouse, whether its a book, tv show, or movie.  Which brings me to Three.  There are a lot of familiar tropes in this book: loner with a mysterious past; woman on the run from something bad; child with unusual abilities; bad guys who would stop at nothing to find the woman and child; and post-apocalyptic setting, sometime in our future.  Taken as pieces, they would offer nothing new.  Put together by Jay Posey, and they provide an intriguing story.

Three is a loner, possibly a bounty hunter (that's not too clear), who doesn't like crowds and cities.  That's okay, because in the land he lives in, there aren't a lot of either.  The reason why isn't explained, and it really doesn't matter in this story anyway.  In addition to the harsh conditions, at sundown strange creatures called Weir come out and no one is safe (what they are isn't really fleshed out either, although they are some strange combination of human bodies and mechanical impulses).  While Three is waiting to collect on a bounty, he is approached by a woman (Cass) who is looking for help for her child (Wren) and herself.  It is apparent that Cass is a drug addict and Wren is too young to help her, but Three doesn't want anything to do with them.  When a strange looking man comes looking for them, Three finds himself being misleading.  He then runs into another man after Wren and Cass, and reluctantly commits to helping them find safety.  Thus begins the adventure across the barren wasteland, avoiding many dangers, and discovering a few surprises.

In the midst of reading this book, I kept waiting for the pace to pick up, for more to be revealed about Three, Cass, Wren, the Weir, and their world.  I wasn't sure how much I liked the book.  It was interesting, to be sure, but the pacing seemed slow.  It wasn't until I was nearing the end that I found myself caught up in what was happening, reading the last third of the book in burst to discover what happened. Now, looking back at the story as a whole, I find I rather enjoyed it. The characters were engaging and mysterious, and the setting supported them.  And while the plot wasn't entirely something new, I'm not sure that it was intended to be ground-breaking.  I was more of a character piece, very much in the vein of Clint Eastwood's Spaghetti Westerns. Or maybe it was a moral piece.  Either way, the plot wasn't what drove the story, it was Three and Wren, with a little help from Cass.

There were a bunch of questions I had as I read and finished Three.  I would love to know more about Three; what exactly it is that Wren can do; what happened to the world; what the Weir are; and more.  However, as Three is the first book in the Legends of the Duskwalkers, I'm hopeful that some of these mysteries will be revealed in future installments.

Overall, I would recommend this book to fans of the Loner Anti-Hero type (ala Clint Eastwood).  It was interesting and provided many mysteries.  I feel like Posey is on the edge of writing something "New", "Different", and "Deep".  I look forward to following him in the future.

I received a review copy of this book from Angry Robot Publishers in exchange for an honest review.
Posted by Scott at 7:52 AM