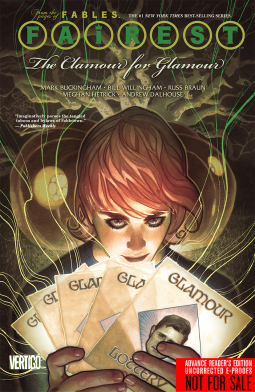 From the publisher: In this new epic, refugees from Fabletown have returned to New York's Castle Dark, and Reynard, now able to shapeshift from fox to man, travels the mundane world to regale the animals with tales of his exploits, rubbing the other Fables' noses in his good fortune. Frustration at their restriction to the Farm threatens to become a issue once more! Can the animals find a way out of their situation?

Mark Buckingham closes out the Fairest series with Vol. 5: The Clamour for Glamour. As is usual, the story is great. This particular arc hits a couple of points: Reynard the fox has received a glamour so he can become a man. His bragging causes unrest among the other non-human fables at the Farm. This has two results. The first is that Reynard is removed from the farm by one of Snow White's children. He is dropped into the life of Meghan, a homebody living with her cruel uncle and cousin. A love affair and misadventures ensue. The other result is that the non-human fables demand glamours for themselves as well. The compromise is five glamours to be given out through a lottery system. The angling for the glamours causes all sorts of angst and problems, particular with Mr. Sunflower.  These storylines eventually dovetail together, providing some resolution and leading to the final volume of stories in the Fables main series.

The final issue of the series deals with Goldilocks, and her quest to find a kingdom to rule with socialistic principles.  It is a prequel of sorts to the Fairest: In All the Land graphic novel.

I enjoyed this collection. However, it was not as good as some of the previous story collections. With its focus on the non-human fables, it took some getting used to the different points of view. The story of the glamour lottery also seemed to drag on a bit, as Mr. Sunflower wasn't a great point of view character. I'm willing to chalk up my issues to this being the final collection and leading into the greater story taking place in the main Fables series.

Finally, I have enjoyed the entire Fairest series, and Mark Buckingham has proved to be an excellent writer, taking Bill Willingham's characters and crafting entertaining stories along the way. I would recommend this collection to fans of the series.

I received a preview copy of this book from DC Comics and Netgalley in exchange for an honest review.
Posted by Scott at 6:00 AM