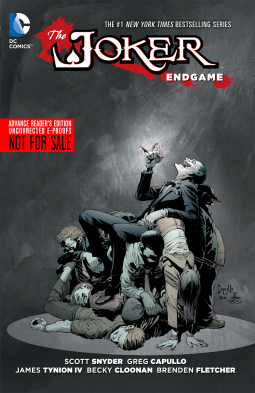 From the publisher: The tie-in to the best-selling BATMAN VOL. 7: ENDGAME is here in THE JOKER; ENDGAME!

Gotham City has been overrun by craziness, and the power is out at Gotham Academy! There's a mob of Jokerized madmen in Gotham City, and they're determined to spread the virus into the world beyond... but they're gonna have to get past Batgirl first! What do Batman's villains do on the craziest night in Gotham City? The city is overrun by Jokerized victims, but a small band of teenagers unites to take a stand. Their secret knowledge of Gotham City's streets helps them survive, but will Batman take help from this young group of upstarts? This jam packed collections features BATMAN ANNUAL #3, back-ups from BATMAN #35-39, GOTHAM ACADEMY: ENDGAME#1, BATGIRL ENDGAME #1, BATMAN AND ROBIN ENDGAME #1, Arkham Manor Endgame 31.

Joker: Endgame by James Tynion IV is basically an expanded version of the Batman Endgame collection. The Batman issues are collected in this book, along with a few of the side stories from the varying Bat-Family books. All said, this is a great collection. It details the Joker's efforts to push Batman to the edge. He begins by releasing a Joker toxin into the air above Gotham. As the citizens are effected, Batman and his crew are left to find a cure, all while the Joker is attempting to kill Batman.

Each of the stories that surround the main plot focus on heroes and characters on the perimeter. Gotham Academy deals with a group of teenagers who attempt to help resolve the problem. Batgirl makes her own attempt at dealing with the Joker's mess. Along the way, Red Robin, Nightwing, Spoiler, Red Hood, Bluebird, and Julia Pennyworth add their support. It is a fascinating group approach to taking on the Joker, who continues to become more and more ruthless in the New 52 continuity.

The Bat books are the best thing going at DC right now, in my opinion, and this outstanding collection is another example of why. It takes Batman and Joker to the brink, and lays the groundwork for lasting consequences going forward for all involved. I highly recommend it.

I received a preview copy of this book from DC Comics and Netgalley in exchange for an honest review.
Posted by Scott at 6:43 AM