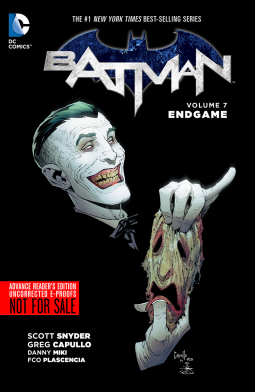 From the publisher: For years, the Joker has regarded Batman with a sick, twisted love, thinking that one could never exist without the other. But that's all changed. Now the Clown Prince of Crime is done playing.

He's going to kill Batman. And he's going to do it using those who Batman loves the most: the Justice League

The Joker returns to Gotham City with a deadlier agenda than ever before, using every tool at his disposal to finally kill the Dark Knight. That includes turning Batman's allies against him in the bloodiest brawl that he's ever had to survive.

BATMAN VOL. 7: ENDGAME is the biggest, boldest story that the #1 New York Times best-selling creative team of Scott Snyder and Greg Capullo have told to date. With an ending you won't believe, this graphic novel is a classic in the making.

Wow! I don't know what else to say. Scott Snyder's last collection of Batman, Vol. 7: Endgame, might be his crowning achievement. In a run that has been spectacular, this is truly the best of the best. In fact, in my opinion, Endgame ranks with the very best Batman stories told, including Miller's Year One and The Dark Knight Returns, Moore's The Killing Joke, and Loeb's The Long Halloween.

Joker has returned with a new and even deadlier form of his Joker toxin. Initially, he uses it on the Justice League, who in turn attack Batman. Then he releases it into the population of Gotham. As Batman attempts to track down a mysterious new element in order to synthesize a cure, he encounters rumors of a "pale man" down through the long history of Gotham. With help from his allies, he puts a plan in to motion. To share anymore would be to spoil the story.

Snyder has had his finger on the pulse of Batman since he took over writing the book. This is just more of the same, although I believe he has topped himself here. He has captured the spirit and emotion of Batman that many writers and readers seem to miss. The last few pages of the collection contain a perfect summary of the legacy of Batman. Read this book if just for this part.

Greg Capullo does a terrific job with the art. It complements the mood wonderfully, and adds to the depth and tone that Snyder sets with his writing.

I give Batman Vol. 7: Endgame my highest recommendation. It is a must read for Batman fans, and should be read by the casual superhero fan as well.