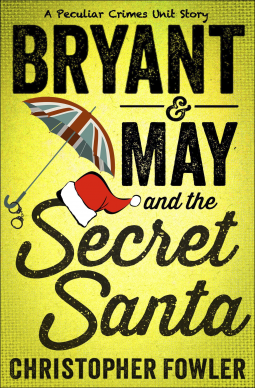 In this fast-paced Peculiar Crimes Unit mystery, available as an eBook short story, detectives Arthur Bryant and John May must crack a puzzling Christmas case with some extra assistance from Santa's little helpers.

The streets of London are covered in twinkling lights and freshly fallen snow, but the mood inside the Christmas department of Selfridges is decidedly less cheery. Bryant and May have arrived there to investigate the death of an eleven-year-old boy who inexplicably fled the store after a routine visit to Santa's Wonderland. Their only clue is a torn scrap of blue cloth discovered at the scene. Now, Bryant and May are making a list of suspects, but they'd better check it twice to catch a shifty culprit in disguise.

Christopher Fowler’s latest Bryant and May story, Bryant & May and the Secret Santa, is actually just a short story (and just an ebook as of now).  The two detectives from London’s Peculiar Crimes Unit (PCU) investigate the death of an eleven-year-old boy who was struck by a bus after running from a department store Santa. What they find is an interesting twist on England’s boarding school culture.

Having read the first book in the Bryant and May series, I was passingly familiar with the characters. They are a Holmes and Watson-type team, working in the PCU, which deals with unusual (supernatural) cases. In this particular story, neither the characters nor the PCU are described or explained. While it is not necessary to the story, it would serve to add depth. Additionally, this feels like more of a treat for regular readers of the series, rather than an introduction to the characters for newer readers.

That said, I did enjoy the mystery. I like Christmas mysteries, and Bryant and May are interesting enough characters that I would recommend this short story. It’s a fun, slightly melancholy, read, perfect for a cold, snowy, holiday afternoon.

I received a preview copy of this story from Random House in exchange for an honest review.
Posted by Scott at 6:14 AM