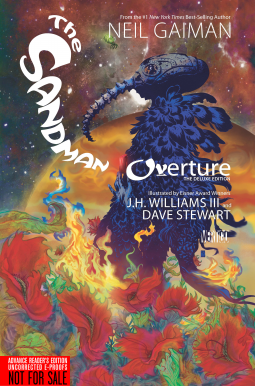 From the publisher: Twenty-five years since THE SANDMAN first changed the landscape of modern comics, Neil Gaiman's legendary series is back in a deluxe edition!

THE SANDMAN: OVERTURE heralds New York Times best-selling writer Neil Gaiman's return to the art form that made him famous, ably abetted by artistic luminary JH Williams III (BATWOMAN, PROMETHEA), whose lush, widescreen images provide an epic scope to The Sandman's origin story. From the birth of a galaxy to the moment that Morpheus is captured, THE SANDMAN: OVERTURE will feature cameo appearances by fan-favorite characters such as The Corinthian, Merv Pumpkinhead and, of course, the Dream King's siblings: Death, Desire, Despair, Delirium, Destruction and Destiny.

Neil Gaiman's Sandman has been one of my favorite stories for a long time (and Neil Gaiman one of my favorite writers), so I was excited to hear he was going to tell another tale about Dream, the Endless, and the rest of the crew. Sandman Overture is supposed to function as a sort of prequel or origin for Dream (the Sandman of the title). However, its more than that; its another piece in the long story, and not the typical origin.

In the book, Dream is made aware of the fact that an aspect of him has died. He also finds out that the end of everything is near. Overture follows his quest to avert that catastrophe, which was going to occur due to a mistake he made in his past. Along the way, the reader meets up with some old favorite characters, including many of the Dream's siblings, the Endless. We also meet his parents. Woven throughout Overture are threads connecting it to the greater story told in the original Sandman series, leading right up to the event that starts that series. In fact, a reread of the series might be a good idea to see just how the events of Overture link up with the original series.

I don't rightly know how to judge any Sandman story; they are the highest example of what comic books can be. The art, by J.H. Williams, is beautiful and atmospheric. Gaiman tells another wonderful story, which, like the previous Sandman books, seems to be about so much more than what it appears to be.  One of the things I enjoy so much about these books is being to think about them after finishing, discovering the depth they contain.

In addition to the story, the deluxe edition of Sandman Overture also contains many nice extra features. There are interviews with the various members of the creative team, highlighting their thoughts and the creative process that went in to the book.  These provide a cool glimpse behind the curtain.

Overall, I highly recommend Neil Gaiman's Sandman Overture. The entire series is fantastic, and this latest story is actually a good place for new readers to begin. Reading it is well worth your time.j