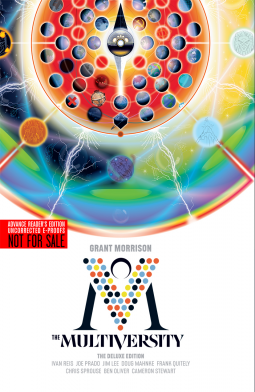 From the publisher:  The biggest adventure in DC's history is here! Join visionary writer Grant Morrison, today's most talented artists, and a cast of unforgettable heroes from 52 alternative Earths of the DC Multiverse! Prepare to meet the Vampire League of Earth-43, the Justice Riders of Earth-18, Superdemon, Doc Fate, the super-sons of Superman and Batman, the rampaging Retaliators of Earth-8, the Atomic Knights of Justice, Dino-Cop, Sister Miracle, Lady Quark and the latest, greatest Super Hero of Earth-Prime: YOU!

THE MULTIVERSITY is more than a multipart comic book series. It's a cosmos spanning, soul-shaking experience that puts YOU on the frontline in the battle for all creation against the demonic destroyers known as the Gentry!

Grant Morrison’s Multiversity is about what you’d expect from him; big, crazy ideas and a bit of meta-fiction. In a nutshell, Multiversity is Morrison’s take on the giant, universe spanning crossover events that DC Comics seems to have every few years. In this case, characters from most of the various DC continuities, Elseworlds tales, and even children’s comics come together to battle a great evil that threatens the very existence of the Multiverse.

I want to look at this collection from two angles. The first is as an event story. Taken as a whole, this story didn’t work for me. There seemed to be a lot of cutting between scenes that left the reader in the middle of a scene or conversation that didn’t have a lot of context. The “bad guy” wasn’t really explained, or even presented for that matter. It was a bit of a jumbled mess.

As individual issues and ideas, however, Multiversity was pretty cool. Morrison manages to throw Cthulhu-type creatures, a Rubik’s cube, comics showing the reality from other dimensions, and some interesting takes on alternate DC universes into a giant cauldron of Wow. I enjoyed the issues spotlighting The Society of Superheroes (a Justice Society-type book), The Just, and Pax Americana. The heroes and worlds in these issues bear further exploration, and I would eagerly read future collections spotlighting these characters.

In addition to the story, the deluxe version includes mulitple cover variants and character sketches. Another cool element (found in the Multiversity Guidebook) is a guide to each of the 52 universes, including some of the major heroes/villians.

Overall, I’m hesitant to recommend Morrison’s Multiversity to the casual comic reader, as it is a bit confusing. However, fans of Grant Morrison should love it. Additionally, readers looking for something different than the typical DC fare, especially the New 52, might enjoy this collection as well.

I received a preview copy of this book from DC Comics in exchange for an honest review.
Posted by Scott at 6:14 AM