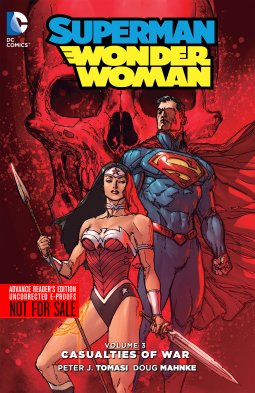 Superman and Wonder Woman—two of the world’s mightiest heroes—are the ultimate power couple. And yet, when a new superhero arrives out of nowhere asking for their guidance, the two Justice Leaguers can’t help but suspect that something is very, very wrong.

Wonderstar has no past, no memories and only a strange connection to Superman and Wonder Woman. He claims his intentions are good, but when his true identity is finally revealed, it will take the combined strength of the Man of Steel and the God of War to take him on.

Featuring the debut of the new all-star creative team, SUPERMAN/WONDER WOMAN VOL. 3: CASUALTIES OF WAR tests the bond between the super-couple like never before! Collects issues #13-17.

Peter J. Tomasi takes over writing on Superman/Wonder Woman with volume 3, Casualties of War. The story involves Wonder Woman and Superman dealing with some fallout from the first time they met, five years prior during the attempted invasion of Earth by Apokolips and Darkseid.  In the midst of this, the super couple meets Wonderstar, a young superhero with no memory of who he is or how he got his powers.  As the mystery progresses, Magog is introduced in to the New 52 universe, and Superman and Wonder Woman are also confronted by a classic villain from Wonder Woman’s past, also making her New 52 debut.

Tomasi’s story is okay, but not spectacular.  I felt like the previous two collections were outstanding and fresh, while this one had a recycled feel to it, partially due to the New 52 universe and having to bring in old villains in new ways.  Additionally, Tomasi does not utilize many of the changes Diana has been going through in the pages of Wonder Woman, other than to touch on her role as the God of War.

The best part of the story was Wonder Woman’s growth as a character, from who she was when she came to the world of man, to who she is after five years living among people.  She has become more human, for lack of a better term, and lost some of the hard Amazonian edge.  She and Superman are a good team, and complement each other. He brings out the humanity in her, while she often forces him to make tough decisions.

The art by Doug Mahnke is nice, and complements the story.

Overall, I think this was an average Superman/Wonder Woman story. It’s a good place for new readers to jump in, and current fans may enjoy it.  However, Superman/Wonder Woman Vol. 3: Casualties of War, by Peter J. Tomasi, didn’t bring a whole lot of new ideas to the party. Hopefully this volume was just laying the groundwork to return this series to its earlier levels.

I received a preview copy of this book from DC Comics and Netgalley in exchange for an honest review.
Posted by Scott at 6:36 AM