A&A: The Adventures of Archer & Armstrong Volume 1: In the Bag by Rafer Roberts - Book Review 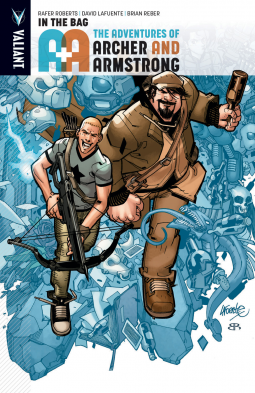 From the publisher: GET SMASHED... OR BE SMASHED! Meet Armstrong: Since the ancient city of Ur, this immortal adventurer has spent the last 7,000 years drinking and carousing his way through history alongside some of the greatest merrymakers the world has ever known. Meet Archer: A sheltered teenage martial arts master and expert marksman that was raised for a single purpose - to kill the devil incarnate. Little did he know that this undying evil was actually Armstrong (he's actually a pretty good guy... once you get to know him) and, since hitting the road together, the two have become great friends and even better partners. Now: Archer is about to set off on his most dangerous mission yet - a quest into the mystic reaches of Armstrong's bottomless satchel to liberate his friend and comrade from the clutches of the mad god Bacchus! (Okay, so, Armstrong went into the satchel himself to get a bottle of whiskey that he kinda misplaced and got stuck. It's like the Amazon warehouse of arcane treasures in there... and he doesn't exactly have a maid service.) Imprisoned in Armstrong's satchel for centuries, Bacchus now commands a legion of monsters, goblins and golems bent on escaping back into the world of man and enacting revenge on their captor... Can Archer single-handedly combat the godly embodiment of intoxication himself - and rescue his best buddy - without becoming lost amongst Armstrong's endless repository of bizarre artifacts and historical oddities in the process? From red-hot rising star Rafer Roberts (Plastic Farm) and superstar artist David Lafuente (Ultimate Spider-Man), Valiant's next blockbuster series starts here! Collecting A&A: THE ADVENTURES OF ARCHER & ARMSTRONG #1-4.

Archer and Armstrong Vol. 1: In The Bag, by Rafer Roberts, is a big, loud, buddy comedy adventure. Armstrong is a near immortal from ancient times. He is all about good times, and occasionally fighting evil. Archer was raised by a parents who were members of a cult. They raised him to assassinate the ultimate evil, aka Armstrong. Through a number of circumstances, they became friends and companions.

In this current book, Armstrong finds out that an old friend (whom he had wronged) has died. Armstrong decides to make things right with the widow, which sends him on a search for an important item that he stored in his bottomless satchel. When he doesn't return, Archer calls on his adopted sister, Mary-Maria, for help. However, she doesn't like Archer, and she runs a group of assassin nuns. Meanwhile, the god Bacchus, who was captured and put in the satchel by Armstrong, begins to exact his revenge. Yes, it's just as crazy and wild as the summary sounds.

So, the story was decent. It had humorous moments, particularly between the hedonistic Armstrong and the naive Archer. There are quips, fights, character moments, and a giant Greek god of parties. Roberts does a fine job of telling the story, and it is entertaining in its way.

While this isn't really my type of book, I would recommend Archer & Armstrong Vol. 1: In The Bag to fans of the previous series and to those who enjoy buddy/comedy/action tales with a bit of raunchiness.

I received a preview copy of this book from Valiant and Netgalley in exchange for an honest review.
Posted by Scott at 6:41 AM