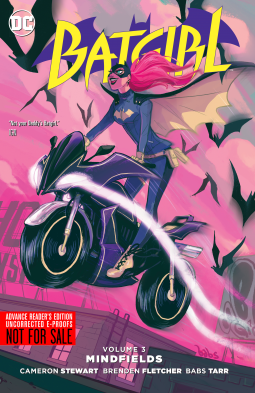 From the publisher: THE BATTLE FOR BURNSIDE IS ON!

She rides a cool motorcycle, swings a mean right hook, and has backup from the best crime-fighters in the biz, but Batgirl's greatest weapon has always been her mind. As the brilliant Barbara Gordon, she's on the verge of a tech breakthrough that could transform her beloved Burnside neighborhood, and all of Gotham City to boot—though if it falls into the wrong hands, it could just as easily devastate them.

But how can Batgirl stop a hacker who can break into her brain itself?

A sinister figure has been haunting Batgirl's nightmares and stealing all her secrets, from her high-tech innovations to her hidden identity. And he'll use that knowledge to destroy her forever.

Now Batgirl must assemble a band of her best friends and closest allies—including Spoiler, Black Canary, Batwing and more—to stop the most dangerous enemy she's ever known, or Burnside and the entire Bat-family will burn…

It all comes down to this! The revolutionary creative team of Cameron Stewart, Brenden Fletcher, and Babs Tarr bring the saga of the Batgirl of Burnside to a close in BATGIRL VOL. 3: MINDFIELDS. Be there for the shocking climax to one of the greatest Batgirl stories ever told!

Cameron Stewart's Batgirl Vol. 3: Mindfields wraps up the New 52 Batgirl story and her time in Burnside, a neighborhood of Gotham. This last volume relates Barbara Gordon's confrontation with The Fugue and a final run-in with the terrorist group Gladius and their commander.

The Fugue is a pretty creative villain concept. He is able to hack people's memories and plant or remove anything he wishes. What makes him a good villain for Batgirl is the fact that Barbara Gordon has an eidetic memory. She literally remembers everything, and uses that as one of her chief weapons in her war on crime. With a computerized implant in her spine enabling her to walk (she had been paralyzed), she is particularly at risk to memory manipulation. After all, when you've always been able to rely absolutely on your memory, what can you believe when you find it's been messed with?

The arc with Gladius was okay, but more than anything, it seemed to serve as a wrap-up to this Burnside storyline. Gladius, and the commander, as suitable villains, but the real star(s) of this story are all Batgirl's friends: Operator, Black Canary, Spoiler, and Bluebird. These heroes form Batgirl's own little version of Batman's extended Bat-Family. The developing relationships among these characters offer some nice potential storylines in the future. At the conclusion of Vol. 3, Barbara Gordon makes a decision that ends this run appropriately while also setting the stage for whatever direction the character is taken after the DC Rebirth event.

Additionally, Batgirl Vol. 3 includes the Batgirl story from the Joker: Endgame story arc, for the Batgirl fans who may not have read the collected version of the Joker story.

Overall, Cameron Stewart has done a fine job. Batgirl showcased a different type of comic storytelling that was unique from most books. Batgirl Vol. 3: Mindfields is recommended to fans of this fun book, as both a natural conclusion to this particular story, and as a jumping off point for the future.