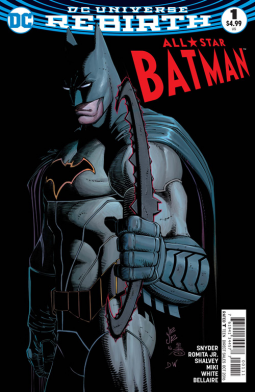 From the publisher: “My Own Worst Enemy” part one! Superstar writer Scott Snyder explodes into an all-new Batman series alongside legendary artist John Romita Jr., reimagining some of the Dark Knight’s greatest villains. First up: Two-Face! Batman must take Two-Face to a destination out of Gotham City, but the duplicitous villain has a two of spades up his sleeve. Every assassin, bounty hunter and ordinary citizen with something to hide is on their tails with one goal: kill Batman! Handcuffed together on the road to hell, this is Batman and Two-Face as you’ve never seen them before!

In what promises to be a cool series, Scott Snyder starts All-Star Batman #1 off with a bang! This opening chapter to the "My Own Worst Enemy" storyline continues DC's new Rebirth process. Snyder drops the reader into the middle of a crisis, with Batman transporting Two-Face to a mysterious location. Two-Face tells Batman that he has offered a reward to anyone who helps him escape, and promises to reveal damaging information about everyone if he isn't freed. As expected, chaos ensues.

I really liked this opening chapter, and look forward to seeing where Snyder takes the story. He has done such a great job writing Batman over the past few years, and I can't wait to find out how he handles Two-Face.

In addition to the main storyline, there is a back-up feature about the new "Robin", Duke from the Robin Wars story. It looks interesting as well.

Overall, Snyder has done it again with All-Star Batman. He has a proven track record with this character, and this book should be in the must read pile of any Batman fans, as well as fans looking to give the new DC Rebirth books a shot.

I received a preview copy of this book from DC Comics and Netgalley in exchange for an honest review.
Posted by Scott at 6:43 AM