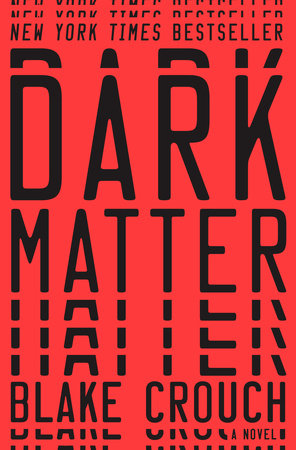 From the publisher: “Are you happy with your life?”

Those are the last words Jason Dessen hears before the masked abductor knocks him unconscious.

Before he awakens to find himself strapped to a gurney, surrounded by strangers in hazmat suits.

Before a man Jason’s never met smiles down at him and says, “Welcome back, my friend.”

In this world he’s woken up to, Jason’s life is not the one he knows. His wife is not his wife. His son was never born. And Jason is not an ordinary college physics professor, but a celebrated genius who has achieved something remarkable. Something impossible.

Is it this world or the other that’s the dream? And even if the home he remembers is real, how can Jason possibly make it back to the family he loves? The answers lie in a journey more wondrous and horrifying than anything he could’ve imagined—one that will force him to confront the darkest parts of himself even as he battles a terrifying, seemingly unbeatable foe.

Dark Matter is a brilliantly plotted tale that is at once sweeping and intimate, mind-bendingly strange and profoundly human—a relentlessly surprising science-fiction thriller about choices, paths not taken, and how far we’ll go to claim the lives we dream of.

Blake Crouch's Dark Matter is a captivating book. I couldn't put it down, and hated having to stop at any point.  It is the story of a man, Jason Dessen, who has his life assumed by another version of himself. Meanwhile, Jason is sent to an alternate version of his life, one where he made some very different life decisions, which resulted in a very different life. Dark Matter is the story of Jason's journey and efforts to return "home", to his wife and son, and the life he loves.

In Jason Dessen, Crouch has created an everyman-type protagonist. Dessen is easy to relate to for several reasons: he loves his family, he has a relatively "ordinary life" that he loves, and he sometimes wonders "what if" in regards to some past choices he made. The difference is that he is a brilliant physicist and has discovered how to jump timelines that have branched off based on the decisions he made. If this sounds confusing, it really isn't. In Crouch's hands, this concept makes sense and is clear to follow. Additionally, the fact that Dessen is also the antagonist adds another level to the tension, because really, how do you out think yourself?

As for the story, I've seen someone else refer to this as a love story, and I would agree to a point. Jason's love for his wife is the motivating factor for him to get his old life back. In fact, this story reminded me a lot of The Time Traveler's Wife by Audrey Niffenegger. The science fiction concepts layer on top of the love story element and are all surrounded and wrapped up in something that feels very deep and meaningful.

I highly recommend Dark Matter by Blake Crouch. It is a page turning story that should appeal to a wide variety of readers.

I received a preview copy of this book from the Blogging for Books program in exchange for an honest review.
Posted by Scott at 10:22 AM