EVERAFTER: FROM THE PAGES OF FABLES #2 by Dave Justus & Matthew Sturges - Book Review 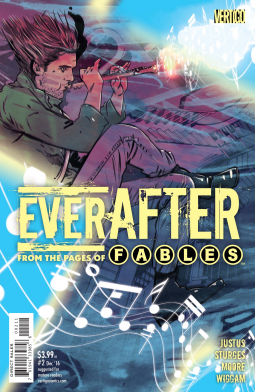 From the publisher: Connor Wolf’s initiation begins as the rest of the Shadow Players regroup and grapple with the fallout from Hansel’s gut-wrenching incident during their recent failed assignment. Tension builds as Feathertop ignores the team’s pleas to complete the mission, and Peter adjusts to Connor’s bravado when the two are sent on reconnaissance to thwart a group of mercenaries who have stolen invaluable—and powerful—Native American artifacts from exhibits across the country. If you’ve been missing the magic of FABLES, don’t miss this series!

With Everafter #2, Justus and Sturges continue the story begun in issue one. They continue to set the table, expanding the reader's view of the Fable world while continuing to develop the characters, in particular Peter Piper and Connor.  Connor, in particular, is becoming a favorite of mine. He brings a youthful perspective to the spying trade as a member of the Shadow Players. His reactions to becoming a spy are basically based on James Bond-type movies (I feel like I might act the same way). This creates a nice tension with Peter, the cool veteran who is grieving a lost teammate. Mayhem ensues as the Peter and Connor run into the group trying to steal Native American artifacts.

Meanwhile, the mysterious girl from the previous issue is demonstrating more of her powers, showing just how dangerous she is. I'm anxious to see how the various story threads are woven together and the Pandora Protocol arc continues to unfold.

I continue to recommend Everafter. Dave Justus and Matthew Sturges are doing a fine job. They are carrying on the Fables tradition, but putting their own spin on things. There is just enough of the familiar to appeal to long-time Fables fans, and enough of a new take to bring in new readers and/or not make Everafter feel like a rehash of earlier stories. Highly recommended.
Posted by Scott at 6:28 AM