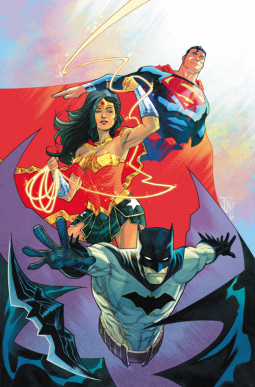 From the publisher: “BETTER TOGETHER” part two! Superman, Wonder Woman and Batman have uncovered a window into their very souls: and the power of temptation proves to be stronger than any villain they could battle! The bonds of friendship and trust between the most formidable heroes on the planet will be tested to their breaking point, with the lives of innocents hanging in the balance!

Trinity #2, by Francis Manapul, continues the Better Together storyline that began with issue #1. Superman, Batman, and Wonder Woman are thrust into Clark's past. There they come into contact with a young Clark Kent and have some explaining to do to Jonathan Kent, Clark's father. When young Clark goes missing, its up to the three heroes to find him. Meanwhile, in the present, Jon Kent is coming to the realization that his life might change now that his dad has taken up the mantle of Superman again.

Trinity is starting out strong, and this second issue continues the fine storytelling. Manapul's storytelling and art are terrific, and this story has the potential to be very entertaining. My favorite thing about this book is seeing how Batman, Superman, and Wonder Woman interact and develop a new relationship. In the wake of Rebirth and the blending of various alternate universes, these long-time "friends" have tare trying to build trust and friendship with people who look and act like those they've known, but are alternate versions of their teammates. This should fascinating to watch as Trinity continues.