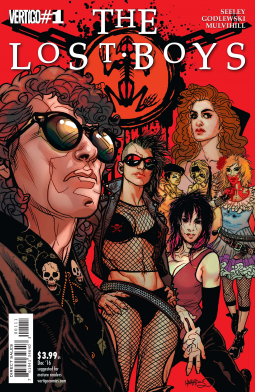 From the publisher: The stakes are raised in this nostalgic and unstoppable sequel to the ’80s cult classic vampire film, The Lost Boys. Veteran horror writers Tim Seeley (GRAYSON, NIGHTWING, Hack/Slash), and Scott Godlewski (THE DARK & BLOODY, Copperhead) deliver a gruesome and stylish return to the bloody boardwalks and big hair of 1987!

Santa Carla, California is on edge. The eccentric coastal town and haven for the undead was finally returning to “normal” after its last supernatural scuffle left the local coven’s head vampire dead and gave newcomers Michael and Sam Emerson a housewarming both violent and bizarre. Now the brothers must once again team up with militant vampire hunters Edgar and Allan Frog when a new gang of ruthless, stunning, life-sucking nightcrawlers known as the Blood Belles emerges from the aftermath to collect Michael’s love interest and their lost sister, Star.

Growing up in the 80's, I was a big fan of the movie The Lost Boys. It was just the right mix of creepy, scary, and funny. Now, Tim Seeley and Scott Godlewski have written a sequel, so I thought I'd check it out.

Lost Boys #1 takes place shortly after the film ended. In this first issue, we catch up with nearly all the major players from the movie: Edgar and Allan Frog, who are training to become full-fledged vampire hunters with Grandpa Emerson; Michael Emerson (former vampire) is working at a nursing home, where he is picked up after work by his girlfriend, Star (herself a former vampire); and Sam Emerson is still working at the comic shop and trying to meet girls. There is even a brief cameo from the child-vampire Laddie and the Emerson's dog Nanook. We even come into contact with a mysterious new woman who is very interested in Sam and his knowledge of vampires (or at least vampire comics).

Lost Boys #1 is very effective in laying the groundwork for the series. There are a couple of nice reveals, but mostly this issue is set-up for what is to come. The story moves along nicely and the art has a nice 80's feel to it. The whole book nicely captures the feel of the film.

I highly recommend Lost Boys #1 by Seely and Godlewski. It's great for fans of the movie, and would be a fun read for fans of horror with humor.

I received a preview copy of this book from DC Comics in exchange for an honest review.
Posted by Scott at 8:14 AM