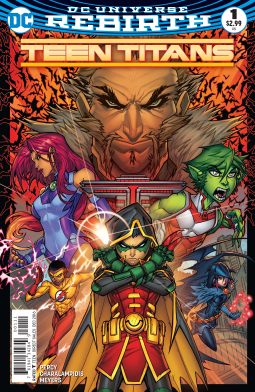 From the publisher: “Damian Knows Best” part one! Now that Damian has “summoned” the Teen Titans, the tyrannical teen reveals his master plan! But a great evil from Damian’s past is lurking around the corner, ready to strike at the team’s newest leader and destroy the new Teen Titans before they even begin!

Following the Rebirth issue of Teen Titans, Percy and Meyers's Teen Titans #1 kicks off the Damian Knows Best storyline. Damian Wayne is Robin. He is also Batman's son. He also recently turned 13, and had no friends with which to celebrate. These things combined to lead Damian to try to form a new version of the Teen Titans. Unfortunately, he went about it the wrong way; he kidnapped all the potential candidates (Starfire, Kid Flash, Beast Boy, and Raven). Suffice it to say, they weren't happy.

This first issue is heavy on Damian attempting to convince his fellow heroes that they should become the Teen Titans. It's not heavy on action, but Percy and Meyers do a wonderful job in capturing the voice and spirit of each of the characters, including Alfred Pennyworth, Bruce Wayne's butler and possibly Damian's only friend. Beast Boy's insecure arrogance, Raven's brooding, Starfire's anger, and Kid Flash's confusion are highlighted by Damian Wayne appealing to them. As the character has developed, he has gone from an insufferable brat to a young man struggling to accept who he is and what he has been through. Damian desperately wants to form a team of heroes/friends, but his social skills are severely lacking. To me, this is the chief part of why Teen Titans is worth reading. There is tremendous potential in the story of Damian Wayne growing and learning while surrounded by other heroes his age, working to become more like Batman and less like Ra's al Ghul (his grandfather and leader of the League of Assassins).

Teen Titans is definitely one of the Rebirth series to read. This first part in the Damian Knows Best arc gets the series off to a fine start. Benjamin Percy and Jonboy Meyers have done an excellent job. I recommend it to fans of teen team books and readers interested in seeing what happens with Damian Wayne.