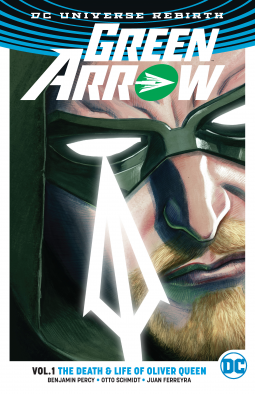 From the publisher: The way the Emerald Archer lives his life will change forever, as Green Arrow is betrayed by those closest to him!

A budding relationship with Black Canary forces Ollie to confront the fact that you can't fight "the man" if you are "the man." And one by one, all of his friends leave him, and all the money in the world won't bring them back when he needs them most. The events of "The Death and Life of Oliver Queen" will rattle Oliver's status quo so much, his choices as a superhero will never be the same again.

Green Arrow Vol. 1: The Death and Life of Oliver Queen, by Benjamin Percy, is the first collection of Green Arrow comics under the Rebirth banner. Oliver is at home in Seattle, where he is the face of Queen Industries and also the Green Arrow. He's got a pretty good relationship with his younger half-sister, and he's just begun a relationship with Black Canary, aka Dinah Lance. He even saved a group of homeless people from the Underground Men, a group of human traffickers. Along the way, he discovers that there is a much larger group working behind the scenes: The Ninth Circle. What they do, how they attack Green Arrow, and several betrayals form the basis of this book.

I didn't read any of the New 52 Green Arrow books, so I'm not really sure how this version differs, if at all. However, I do watch Arrow, and this seems to be an attempt to bring the comic and tv show in line a bit. Oliver has a half-sister, Emiko, who fights crime with him, Dinah Lance has joined him to fight as Black Canary, and John Diggle also makes an appearance, as does Shado. Additionally, there is a back-to-basics approach to this story that seems reminiscent of Arrow. None of these are bad things; in fact, I found this book to be entertaining and fast-paced. Percy does a good job with the characterization, particularly with Oliver Queen's more liberal, social justice seeking aspects, which have long been a part of this comics. It also has a nice reflection on the dichotomy of a rich playboy passing himself off as a hero for the common man. As far as the villains, the Ninth Circle was serviceable but seemed to function more as a foil for resetting Oliver Queen's life.

While a good read, Benjamin Percy's Green Arrow Vol. 1: The Death and Life of Oliver Queen works more as the opening arc in a much bigger look at who Green Arrow is and what his mission will be. I found it fun and highly readable. It should appeal to fans of the comic version of Green Arrow as well as fans of the show Arrow. It is also a great jumping on point for new fans. I highly recommend it.