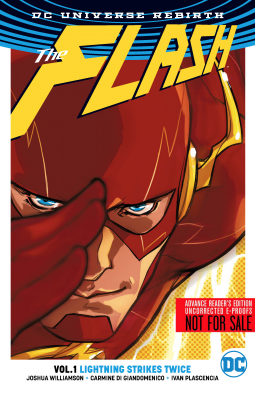 From the publisher: A new storm brews over Central City and disproves the old adage about lightning never, well...you know. Just as Barry begins to feel overwhelmed fighting crime, a new speedster debuts--but just where did this amazing new friend come from? Spinning directly out of the epic events of DC UNIVERSE: REBIRTH, the Fastest Man Alive finds himself at the center of a DC Universe at a crossroads--and reeling from the reemergence of his protegee, Wally West!

From up and coming writer Joshua Williamson (Illuminati, Red Skull) and illustrator Carmine Di Giandomenico comes THE FLASH VOL. 1! Collects THE FLASH: REBIRTH #1 and The Flash #1-8.

Rebirth honors the richest history in comics, while continuing to look towards the future. These are the most innovative and modern stories featuring the world's greatest super-heroes, told by some of the finest storytellers in the business.

The Flash Vol. 1: Lightning Strikes Twice is Joshua Williamson's new Rebirth book. The Flash family took on a lot of changes in the New 52 universe as a result of Barry Allen's Flashpoint adventure. The most significant of these changes, at least in my opinion, was eliminating the original Kid Flash, Wally West. The opening chapter of this book is the Rebirth issue, and it reintroduces Wally West to the DC Comics universe, and is the first step in righting many of the perceived "wrongs" of the New 52 years. The Flash and Batman get together and decide to investigate what happened to cause everyone to forget years of their lives, and everything that entails.

The bulk of The Flash Vol. 1 deals with Barry Allen looking in to a robbery at S.T.A.R. Labs. Shortly after the robbery, a freak lightning storm occurs, similar to the one that gave Barry his powers through the speed force. And wouldn't you know; the storm hits multiple people, creating a very large group of inexperienced speedsters. Throw into the mix Barry's friendships with Detective August Heart and Iris West, her nephew Wally West (not the original), and a potential love interest, and Williamson has the makings of an interesting book. Things only ramp up when the mysterious new speedster Godspeed arrives.

I enjoyed this book. Williamson has done a nice job with the characters, and has written an intriguing arc as The Flash begins its Rebirth series. He has carried over the New 52 events and has laid some groundwork for what is to come in future installments.

For my money, though, the best part of The Flash Vol. 1 is the Flash: Rebirth story. The emotion of Barry saving Wally from oblivion and the mystery of who or what is behind all that happened in the last five years of DC Comics is fantastic. I wish that Williamson had been able to explore this story more. It also spun Wally off on his own again too fast. I look forward to seeing how the relationship between he and Barry is repaired.

Overall, The Flash Vol. 1: Lightning Strikes Twice by Joshua Williamson is terrific. I highly recommend it to Flash fans and to anyone looking for a good jumping on point.

I received a preview copy of this book from DC Comics in exchange for an honest review.
Posted by Scott at 6:42 AM