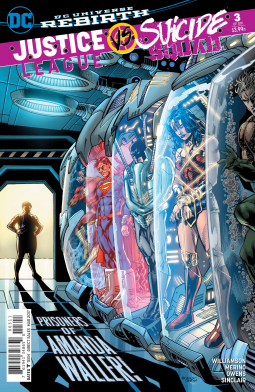 From the publisher: Belle Reve Penitentiary. Headquarters of Task Force X, home to the worst super-criminal scum in the DC Universe and new residence of…the Justice League?! The Suicide Squad delight in showing Earth’s greatest heroes how the other side lives, and you’d better believe the Justice League needs to be restrained to hear the terrible secret Amanda Waller has to tell them.

Issue #3 of Justice League vs. Suicide Squad finally puts all the cards on the table. The League has been captured, the Squad is reveling in their victory, and Maxwell Lord and his team are moving closer to their goal: the death of Amanda Waller! Joshua Williamson continues to produce a fun, action-packed book.

Batman, doing his Batman thing, finally gets Waller to open up about why she had the League captured. As the Suicide Squad gloats over the captured heroes, Waller decides to free them. This leads to the long-standing tradition of unlikely allies teaming up to stop a greater evil: in this case, Maxwell Lord and his team of killers, which includes Johnny Sorrow, Dr. Polaris, Emerald Empress, Rustam, and Lobo.

I'm really enjoying Justice League vs. Suicide Squad, and Joshua Williamson's third issue is no exception. The plot moves forward and the resulting team-up promises to push everything into high gear. I highly recommend this book, particularly to fans of huge team-ups.

I received a preview copy of this book from DC Comics in exchange for an honest review.
Posted by Scott at 6:32 AM