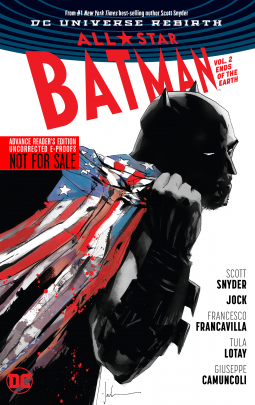 From the publisher: #1 NEW YORK TIMES best-selling BATMAN author Scott Snyder's ALL STAR BATMAN continues with a new volume featuring new stories drawn by some of the top artists in all of comics!

For more than 75 years, Batman has been one of the most widely-recognized and revered super-heroes in all of comics. But what would the Dark Knight be without an equally iconic roster of villains to keep him fighting all these years? In ALL STAR BATMAN VOL. 2, Scott Snyder is joined by a rotating team of superstar artists to tell individual, villains-centric stories that in their sum reimagine the Caped Crusader's rogues gallery and bring it into the modern era.

One the most successful and well-reviewed series from DC UNIVERSE REBIRTH continues in Scott Snyder's star-studded, ALL STAR BATMAN VOL. 2! Collects issues #6-9.

The more I read his books, the bigger fan I am of Scott Snyder. With All-Star Batman Vol. 2: Ends of the Earth, Snyder once again has written a great Batman story (although according to the narration, "This is not a Batman story). With a rotating cast of artists, Snyder tells a tale of ecological destruction featuring four different villains.

The first three stories, which are connected but self-contained, star Mr. Freeze, Poison Ivy, and Mad Hatter. Batman is tasked with dealing with each of them and some sort of ecological disaster. By the time the fourth chapter rolls around, Snyder has set the table perfectly for his surprising conclusion. This book has appearances by the mysterious Blackhawk group, as well.

My favorite part of this collection is the Mad Hatter story. I always thought Jervis Tetch was sort of corny as a villain, and at his best he was a creeper. Snyder, however, really gave him a serious and threatening turn as a villain, making him a legitamate rogue for Batman.

In addition to the main story, Snyder continued his run of back up features tracing the training of Batman's new partner, Duke Thomas. Intertwined with a threat from the Riddler, Duke struggles to find his place in the Bat-family. It's a neat way to do a Year One type story for Duke without having it be the main storyline.

I highly recommend All-Star Batman Vol. 2: Ends of the Earth by Scott Snyder. He has got a great feel for Batman and he continually adds to his reputation as one of the best at relating the adventures of the Dark Knight. If you like Batman, you should definitely pick this up, and it functions as a jumping on point for new readers as well.

I received a preview copy of this book from DC Comics and Netgalley in exchange for an honest review.
Posted by Scott at 6:31 AM