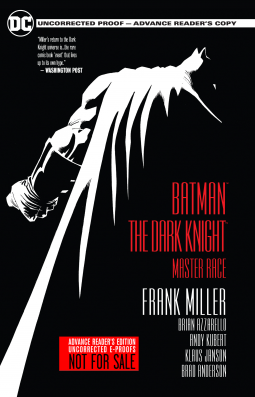 From the publisher: One of the most highly anticipated sequels of all-time is finally here in DARK KNIGHT III: THE MASTER RACE!

In 1986, Frank Miller introduced his iconic take on Batman and changed the face of comics forever. Now, three decades after BATMAN: THE DARK KNIGHT RETURNS, Miller himself has returned with a third chapter to his groundbreaking saga.

Also collected in this graphic novel are the nine mini-comics that originally appeared in the monthly periodical release of DARK KNIGHT III: THE MASTER RACE, each of which focuses on a different character from within the world of Miller's Dark Knight. The minicomics are also written by Miller and Azzarello and will be drawn by some of the greatest artists currently working in comics, including Miller himself, Eduardo Risso and John Romita, Jr.!

Collected here are all nine chapters of DARK KNIGHT III: THE MASTER RACE as well as the nine mini-comics.

I read Frank Miller's The Dark Knight Returns and loved it. I read Miller's The Dark Knight Strikes Again and liked it. When I heard about Dark Knight: Master Race, by Miller with Brian Azzarello, I was hoping for more of a Dark Knight Returns feeling. And you know what? I did like it. Master Race isn't as good as the original (that would be hard to accomplish), but I enjoyed a lot more than I remember enjoying more than The Dark Knight Strikes Again. And that's a good thing. With sequels or returns to classic stories, there is a danger involved; so many people enjoy the classic original, that the creators risk alienating fans both old and new. Well, in my opinion, Miller and Azzarello have done a fine job with The Master Race.

A quick synopsis: Batman is missing and presumed dead, Superman has removed himself from involving himself in humanity's affairs, Wonder Woman is busy ruling the Amazons and raising her children (a daughter and son). Other heroes seem to be laying low as well. In to this world comes rumor of a Batman sighting, which doesn't sit well with many. Additionally, Lara (the teenage daughter of Superman and Wonder Woman) visits her frozen father at his Fortress of Solitude. While there, she discovers the bottled city of Kandor, and is convinced to take it to Ray Palmer, the hero known as the Atom. The residents of Kandor want to be returned to normal size and Palmer's shrinking technology is just the ticket. But all is not as it seems when the Kandorians return. And thus, the foundation for the story of The Master Race is born.

I enjoyed reading this story. I found that Miller and Azzarello had a new and interesting take on the story of the Kandorians, and the tie-in to how superheroes were viewed in this world was nice. The subplots, involving Superman, Wonder Woman, and their children; Batman and his new Robin, Carrie Kelley; or even the cameos by heroes such as the Atom, Aquaman, and Flash, were all complimentary and dovetailed nicely with the main storyline. In fact, I really liked how the other heroes were very naturally brought into the story, rather than forced in just for fan service.

In addition to collecting the main comic story, this collected edition also contains nine separate mini-comics stories that ran in the individual comics, each focusing on a side story that adds to the overall enjoyment of The Master Race. Some of these stories focus on heroes, such as the Atom or the new Batgirl, and some show events that happen off the page of the main storyline. All were well done and deserved their place in this story.

I received a preview copy of this book from DC Comics and Netgalley in exchange for an honest review.
Posted by Scott at 7:24 AM