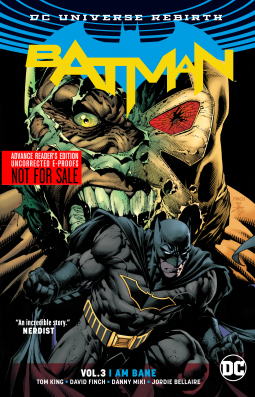 From the publisher: The man who has physically tested the Dark Knight like no one before is back to finally break the Bat for good. Can a battered, exhausted Batman fend off one of his greatest foes? Plus, catch up with Catwoman as she and the Dark Knight battle a collection of villains and plan for the future!

With Batman Vol. 3: I Am Bane, Tom King wraps up his "I Am" trilogy of Batman stories. And boy did he wrap it up well. I Am Bane is a terrific story, with lots of action and some quieter, deeper moments of self-reflection for Bruce Wayne, and even Bane. To summarize the , thanks to Psycho Pirate, a hero known as Gotham is dead and Gotham Girl is emotionally broken. Bane took possession of Psycho Pirate to help him deal with the effects of his long time use of Venom. Batman, knowing the Pirate was the only who could heal Gotham Girl, used a group of questionable "heroes" to take the Pirate from Bane, invading Bane's home, the prison island of Santa Prisca, to do it. Which brings us to this final volume. Bane wants the Pirate back, Batman needs five days for Gotham Girl to be healed, and will do anything and everything to delay Bane in his quest.

With that said, the story is much more involved than that. There are guest appearances by multiple former Robins and Duke, Superman, and Catwoman. There are plans within plans. There is plenty of action and confrontation. And there is an interesting parallel between the childhoods of Bane and Batman. All of this sets up a crisis of conscience for Batman, and sends him off on a new path in his life.

In addition to the main story, there are several others as well. There is a nice tale about how Bruce Wayne acquires a pet dog, named Ace, and an interesting team-up with Swamp Thing that is deeply philosophical. The best of these stories, though, is the epilogue to the I Am Bane storyline. It involves Batman and Catwoman, and spotlights their relationship. It is told in contrast to a conversation between Gotham Girl and Batman. It is well told, and King does a fabulous job with the characterization. In fact, the characterization in this whole volume, particularly with Batman/Bruce Wayne, is a highlight for me. I feel like King has added to an already storied and iconic character, which is hard to do.

Finally, the ramifications of I Am Bane are sure to be felt for a long time. Bruce has come out of this ordeal a changed man, and I'm anxious to see where King takes him. I highly recommend Batman Vol. 3: I Am Bane, particularly to readers who have read the first two volumes in this trilogy. King has risen to the challenge that Scott Snyder left for him on the Batman title. He is well on his way to writing a very definitive take on Batman and I recommend this book to all Batman fans.

I received a preview copy of this book from DC Comics and Netgalley in exchange for an honest review.
Posted by Scott at 4:03 PM