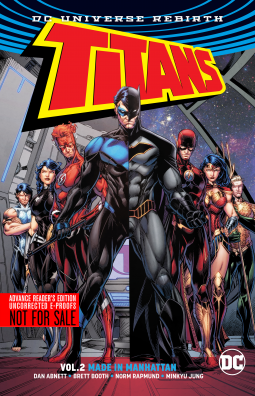 From the publisher: The classic team of former superhero sidekicks continue their adventures in TITANS VOL. 2, as a part of DC Rebirth!

As Kid Flash Wally West and the Titans adjust to their new lives in New York City and investigate a new threat, a mysterious company called Meta Solutions comes to the forefront. Who are they? And what stunning discovery will the Titans make about their new foe?

I've been reading Titans for two reasons: first, I enjoy reading about Nightwing and find that the character is a natural leader; second, with Wally West (Flash) at the center of the Rebirth mystery, I'm hoping for some clues. Titans Vol. 2: Made in Manhattan, by Dan Abnett, offers some of the first, but none of the second.

The main storyline in this volume involves the Titans setting up shop and (quite literally) growing Titans Tower in New York City. They are attempting to make their presences felt, and have hired a legal consultant (which is fairly humorous). Their friends Mal and Karen Duncan figure prominently, as Mal has used a company called Meta Solutions to remove his sound powers. Karen, who recently discovered she has powers of her own, just wants to be able to focus and control her abilities. When Mal runs into an old enemy, he questions just what Meta Solutions is actually doing. Enter the Titans, to help their friends, and the mystery deepens.

Most of the characterization in this volume focuses on Mal and Karen. It actually functions as an origin of sorts for Karen, who Mal affectionately refers to as "Bumblebee". Her quest to use her abilities is a positive contrast to Mal's PTSD that resulted from engaging an enemy while using his abilities. While this story is effectively concluded, it also serves to set up a larger mystery and coming conflict.

In addition to the main storyline, there is a short tale from the Rebirth Holiday Special that shines a nice light on Arsenal. Titan's Annual #1 is also featured here. Abnett tells a story that brings several of the Titans and their Justice League counterparts together in mentor/protege roles. He also manages to delve a bit into the history of Donna Troy (Wonder Girl). My favorite part is how Abnett contrasts the relationship between Barry Allen and Wally West (both Flashes) to that of Batman and Nightwing, Aquaman and Aqualad, and Wonder Woman and Wonder Girl. Suffice it to say that not all of them are functional relationships.

Overall, Titans Vol. 2: Made in Manhattan, by Dan Abnett, was entertaining. I enjoy reading about the original Titans (no longer teens). While I was hoping for some Rebirth clues, I wasn't disappointed in the book. I recommend it to fans of the various heroes (Nightwing, Arsenal, Wonder Girl, Aqualad, Omen, and the Duncans) either together or individually. I look forward to seeing where Abnett takes this group of characters in the future.