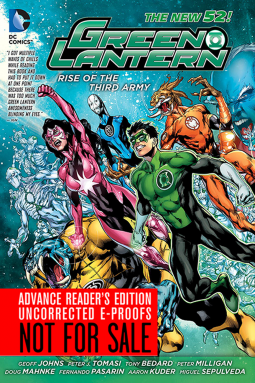 From the publisher: The universe is in shambles and the Guardians are the cause. Their mysterious Third Army has risen across the cosmos like a plague, destroying everything in its path and Hal Jordan and Sinestro are nowhere to be found. It is up to wrongfully accused Simon Baz to clear his name and become the hero that the Corps needs in order to get to the bottom of Hal and Sinestro's disappearance and the Rise of the Third Army!

The Third Army is the latest in what's becoming a series of sprawling, universe-threatening stories in the Green Lantern comics. In this current adventure, the Guardians of the Galaxy are beginning to develop the Third Army, a group of beings who will restore order to the universe.  They will be without the worst of the characteristics of the Guardians previous group, the Green Lantern Corp.  Those characteristics include speaking their mind, questioning their orders, having emotions, and thinking for themselves; in short, everything the Guardians dislike about the Green Lanterns.  The Third Army will eventually assimilate everyone, which will restore perfect order to the universe.

This collection contains various threads related to the larger story of the Third Army. In the most interesting, Kyle Raynor is on a quest to master all seven colors of the spectrum.  He is assisted by Star Sapphire Carol Ferris, who is looking for the missing Hal Jordan.  In another, Atrocitus the Red Lantern visits his former home planet, the site of a massive massacre by the Manhunters (another previous Guardians creation) and the source of the rage that makes him a Red Lantern.  Additional stories follow the other Green Lanterns from Earth.  Guy Gardner comes in contact with the newest Lantern, Simon Baz (who is thought to be a terrorist).  John Stewart is tasked with finding the pieces of Mogo, the living planet and Green Lantern that he destroyed in an earlier battle.

As all the storylines begin to converge, the Green Lantern Corp sets up for a final confrontation with the Guardians and the Third Army.

This was a cool storyline, and it involved nearly everyone in the Green Lantern universe of characters.  This is part of a years-long set-up by Johns, and leads into his final storyline in the Green Lantern comics.  I would recommend this for fans of Green Lantern, or anyone looking for a huge space adventure story (although you may find yourself a bit lost without at least some knowledge of events from previous stories).