The Unwritten: Tommy Taylor and the Ship That Sank Twice by Mike Carey - Book Review 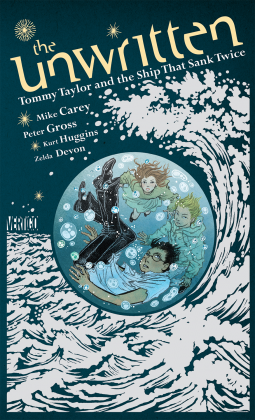 From the publisher: Tom Taylor has lived his life being mistaken for Tommy Taylor, the boy wizard from the world-famous series of novels penned by Tom's long-lost father Wilson. However, after a series of strange events start to parallel the lives of both Taylor's —fictional and real—Tom realizes that he might be the character on page made flesh.

In one story thread, Carey descibes Wilson Taylor's plan to have a son while simultaneously writing a book about a fictional version of the same son.  Taylor's journal describes the process of writing, publishing, and publicizing his first Tommy Taylor novel, while trying to make sure his son Tommy echoes the fictional version.  It's a pretty interesting look into Wilson's plan that is only hinted at in the ongoing series.

The other story thread is the storyline for the first Tommy Taylor novel.  This is the best part of this graphic novel.  It's a lot of fun to be able to read the story of Tommy's first years and his introduction to his friends Sue and Peter.

The background to the fictional Tommy Taylor adds depth to the overall series, as does the look into WIlson Taylor and Tommy's birth.  The Unwritten keeps getting better and better as Carey reveals more and more of the greater story taking place.  What started out as a Harry Potter pastiche (at least as far as appearances go) has grown into a greater look at the power of stories in our lives.

I highly recommend this book to fans of The Unwritten, in addition to fans of Neil Gaiman's Sandman and other works.

I received a preview copy of this book from DC Comics in exchange for an honest review.
Posted by Scott at 6:29 AM