Saturday, Griffin and Cami's flag football season came to an end in the second round of the playoffs.  Griffin pulled another flag, which I think means he got at least one in every game.  He also carried the ball once for about 2 yards.  Even though they didn't win many games, it was a successful season on a personal level for Griffin.  I could see the wheels turning as he figured things out.  He also became more aggressive on both sides of the ball.  At this point, we are playing catch in the backyard and he has been disappointed that there aren't football games on before bedtime during the week. 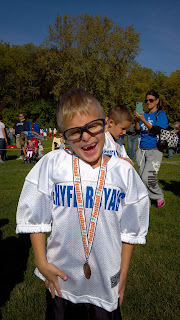