The Rose and the Thorn by Michael J. Sullivan - Book Review 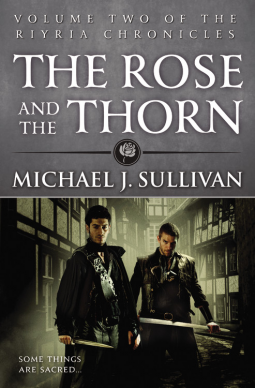 From the publisher: Two thieves want answers. Riyria is born...

For more than a year Royce Melborn has tried to forget Gwen DeLancy, the woman who saved him and his partner Hadrian Blackwater from certain death. Unable to get her out of his mind, Royce returns to Medford with Hadrian but the two receive a very different reception --- Gwen refuses to see them. The victim of abuse by a powerful noble, she suspects that Royce will ignore any danger in his desire for revenge. By turning the thieves away, Gwen hopes to once more protect them. What she doesn't realize is what the two are capable of --- but she's about to find out.

The Rose and the Thorn further develops the relationship between Gwen, Royce and Hadrian, picking up about a year after the first book.  Royce and Hadrian have been working together, pulling small jobs.  They are making their way back to Medford to see Gwen, when they meet Viscount Albert Winslow (the short story The Viscount and the Witch makes up the 2nd chapter).  Gwen has been beaten and refuses to see them; Royce makes it his mission to discover who is responsible and make them pay.

The other thread in the story introduces the royal family of Medford, King Amrath, Queen Ann, Prince Alric, and Princess Arista.  It also introduces Reuben Hilfred, the Pickerings, Percy Braga, and Bishop Saldur.  Hilfred is about to officially join the Palace Guard and is deeply in love with the princess.Braga is the newly appointed Chancellor and the king is having a celebration for him.  In addition, there is a conspiracy afoot to murder the royal family.

As the two separate threads of the story begin to come together, our characters become more and more intertwined.  Several (dangling) plot threads from Riyria Revelations are set up in The Rose and the Thorn, and are done so very nicely.  There is also nice character development, as Royce and Hadrian, along with Hilfred, are further rounded out into fully realized characters.

Once again, Michael J. Sullivan has done a fantastic job of writing a prequel.  He has a talent fitting these stories into the overall story arch seamlessly, rather than making them feel tacked on.  A reader new to Riyria will not have any of the later surprises spoiled; in fact, the clues and foreshadowing provided are lined up precisely.  For fans of the first series, its fun to see the story expanded and holes filled in; Sullivan has included several easter eggs for his fans.

I highly recommend this book for fans of light fantasy and caper-type stories.  Sullivan has shown how a prequel should be done; I look forward to reading the further adventures of Royce, Hadrian, and company in future Riyria Chronicles stories.

I received a preview copy of this book from Orbit in exchange for an honest review.
Posted by Scott at 6:42 AM