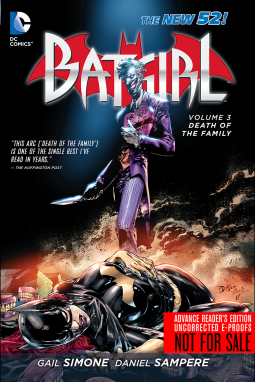 From the publisher: Gail Simone continues her Batgirl run in a tale that ties into the best-selling Bat-Family event "Death of the Family." When the Joker returns, Barbara Gordon must confront her past as she deals with the crazed criminal responsible for crippling her. Plus, once the dust settles, Barbara must deal with her family demons as her psychotic brother James Jr. comes after her.


Gail Simone’s Batgirl: Death of the Family is an excellent addition to the Death of the Family story.  Because of her past history with Joker, this is one of the more personal, and darker, volumes in the saga.  Barbara Gordon has a very personal stake in ending Joker’s reign of terror and appears to be willing to go to extremes to accomplish it.  She begins to approach some tough moral territory, and Simone handles this conflict very well.
In addition to dealing with the threat of Joker, Barbara is being tracked by her sadistic and psychopathic brother, James.  As he establishes a relationship with Barbara’s roommate, he also orchestrates a confrontation between he, Barbara, and their recently returned mother.
There are a number of impactful scenes, including James nearly taking on the Joker, a phone call from Dick Grayson (Nightwing) to Barbara, and the showdown with the Gordon family.  I did not expect the quality of this book to be so high, but in my opinion it rivals the main story running through Scott Synder’s Batman.
I highly recommend this book.  Barbara Gordon has become a very interesting and complicated character since the New 52 began, and this book just raises the bar even higher.  It is as good as anything currently available.
I received a preview copy of this book from DC Comics in exchange for an honest review.
Posted by Scott at 6:43 AM