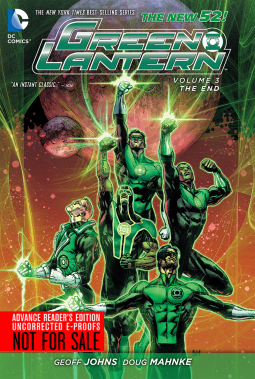 From the publisher: The universe is in shambles and the Guardians are the cause. Their mysterious Third Army has risen across the cosmos like a plague, destroying everything in its path and Hal Jordan and Sinestro are nowhere to be found. It is up to wrongfuly accused Simon Baz to clear his name and become the hero that the Corps needs in order to get to the bottom of Hal and Sinestro's disapperance and the Rise of the Third Army!

Wow! This is it, Green Lantern fans.  This is what the last several years have been building toward.  And it is worth it.  This volume of Green Lantern is hard to review, because it effectively functions as the climax of Geoff Johns's run on the title.  Without spoiling anything, The End has everything in it: Hal Jordan, Sinestro, the First Lantern, Simon Baz (the new Green Lantern), multiple lanterns of various colors, the Guardians, and the rest of the major Green Lanterns.  The threads that were laid out years ago are finally tied off and the whole of Johns's story (dare I say "masterpiece"?) is revealed.  The expanded mythology of the Green Lanterns and the rest of the Lanterns of the emotional color spectrum is fleshed out and brought to a satisfying conclusion.

I can't recommend this book highly enough, and the payoff for longtime readers will be amazing.  Even a casual fan will find it an enjoyable story.

I received a preview copy of this book from DC Comics in exchange for honest review.
Posted by Scott at 6:43 AM