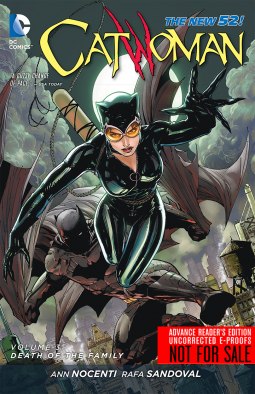 From the publisher: Writer Ann Nocenti begins her run with the feline fatale! Catwoman must stay one-step ahead of the Joker as he terrorizes Batman and his allies during the Bat-Family crossover event "Death of the Family." But there's no rest for the wicked as hot on the heels of her encounter with the Clown Prince, Catwoman is hired to break into the Black Room to steal the Black Diamond--the source of power for the villainous Eclipso!

The current volume of Catwoman loosely ties in to the Death of the Family storyline running through the Bat-titles, and Catwoman's role in Batman's life is interesting. She provides a rather unique contrast to Joker, refusing to bow to his pressure but in a different way than the Bat-heroes would do.

However, Selina Kyle (Catwoman) is a more interesting character when the story explores the moral issues of a thief (sometimes for-hire) who also has a strong desire to help others, particularly children and women.  One storyline shows what happens when an ordinary cat-burglar tries to steal a supernatural item, and the item is activated.  The #0 issue gives the reader a glimpse into Selina's backstory, showing who she was before she became Catwoman.  Its a good read.  The latter part of this volume deals with some of the ramifications of information revealed in that semi-origin issue.  The mystery surrounding Selina Kyle only gets amped up as Ann Nocenti takes her story into unexpected territory.

I enjoyed this book more than I expected and look forward to seeing how the story unravels further down the line.  Catwoman/Selina Kyle is showing a lot of potential to be a very intriguing book.