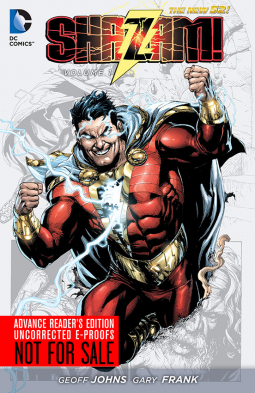 From the publisher: Young orphan Billy Batson has bounced from foster home to foster home, but he's far from the ideal child. Brash and rude, Billy is a troubled teen that just can't seem to find a calling. But after a fateful night on a subway car, that all will change.

Brought to the feet of the magical wizard Shazam at the Rock of Eternity, Billy is imbued with powers beyond any mortal man. By shouting the wizard's name--Shazam!--the young teen is mystically transformed into the powerhouse known as Captain Marvel! Now given abilities that make him Earth's Mightiest Mortal at the utterance of a simple phrase, will Billy make the right choices and do what it takes to become a hero? Or will he succumb to the poor choices of youth--and the villainous Black Adam!
Shazam Vol. 1 collects the back-up features that originally ran in DC's Justice League comic.  In it, Geoff Johns (DC's writer extraordinaire) introduces Captain Marvel, also known as Shazam, into DC's New 52 continuity.  And Johns was an excellent choice to do so, given his history of taking lesser-known or uninteresting characters and giving them life and creativity.

I always felt the old version of Captain Marvel was somewhat cheesy.  He'd been written like an immature Superman or a super boy scout, but he wasn't ever that deep.  Now, though, Johns has added depth to the story of Billy Batson, the teenager who was given the power of Shazam.  Billy is a foster child. He is devious, rude, sarcastic, and has been in and out of multiple homes. He is far from the old squeaky clean version.

The wizard Shazam is looking for someone to make his champion, to give them the power of the living lightning to protect the world from evil.  He transports and tests multiple people, one of whom is Billy.

Meanwhile, Dr. Sivana is looking to save his family by discovering how to access magic.  He discovers where Black Adam, the wizard Shazam's former champion, is imprisoned.

I really enjoyed this story, particularly the development of Billy Batson.  It's an interesting take on what a typical teenager would do when given extraordinary powers.  The supporting characters, particularly the other foster kids, show a lot of potential. Gary Frank's art completed the story nicely, as well.

I would recommend this to fans of Captain Marvel and Geoff Johns's writing.  It looks to be a fun story to follow.