The Republic of Thieves by Scott Lynch - Book Review 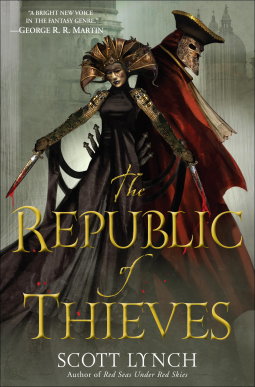 From the publisher: With what should have been the greatest heist of their career gone spectacularly sour, Locke and his trusted partner, Jean, have barely escaped with their lives. Or at least Jean has. But Locke is slowly succumbing to a deadly poison that no alchemist or physiker can cure. Yet just as the end is near, a mysterious Bondsmage offers Locke an opportunity that will either save him or finish him off once and for all.

Magi political elections are imminent, and the factions are in need of a pawn. If Locke agrees to play the role, sorcery will be used to purge the venom from his body—though the process will be so excruciating he may well wish for death. Locke is opposed, but two factors cause his will to crumble: Jean’s imploring—and the Bondsmage’s mention of a woman from Locke’s past: Sabetha. She is the love of his life, his equal in skill and wit, and now, his greatest rival.

Locke was smitten with Sabetha from his first glimpse of her as a young fellow orphan and thief-in-training. But after a tumultuous courtship, Sabetha broke away. Now they will reunite in yet another clash of wills. For faced with his one and only match in both love and trickery, Locke must choose whether to fight Sabetha—or to woo her. It is a decision on which both their lives may depend.

The Republic of Thieves is the long-awaited third book in Scott Lynch's Gentlemen Bastards sequence.  I read the first two books back in 2008 and, like many people, have been anxiously awaiting the third installment.  Having loved the first two books, The Lies of Locke Lamora and Red Seas Under Red Skies, I wondered if Lynch could recapture the magic he delivered previously.  Well, he did and then some.

The Republic of Thieves picks up very shortly after the previous book ends, with Locke Lamora in mortal danger, a complication of their previous adventure.  He and his partner, Jean Tannen, are hiding out, trying to figure out what they are going to do. They are soon contacted and enlisted to help run one side of the Five Year Game, the election in the city of Karthain, home of the Bondsmagi (who happen to hate Locke and Jean).  Their opponent in the election: Sabetha, a former Gentleman Bastard and Locke's deepest love; it has also been five years since Locke has seen her.  What follows is a twisting romp through the election process, as the three friends reconnect as rivals.

In addition to the main tale, Lynch (like in the other books) interweaves information about Locke's youth, this time focusing on his relationship with Sabetha.  It is fascinating and captivating watching more of Locke's history unfold.  As he and the other Gentlemen Bastards embark on a summer as an acting troupe, they are forced to use their con-artist skills in an entirely different way than in the main story.

Because Lynch's stories rely so much on twists, surprises, and subverted expectations, I won't reveal any more plot points, but suffice to say that Lynch once again is in top form.

As good as he is at telling a story, Lynch is even better with his characters.  Locke and Jean are two of my favorite characters.  Each has a distinctive voice, which Lynch conveys perfectly. The flashbacks revisit many other supporting characters, all who stand on their own as distinctive and original (even the Sanza twins). Seeing how events play out for the characters is a joy.  The interaction between the crew reminds me of the friendly antagonism of Brad Pitt, George Clooney, Matt Damon, and the rest of the Ocean's 11 crew.

This is a very tough review to write, because I don't want to spoil anything.  I highly recommend this book, I would encourage all who read the previous two books.  If you haven't discovered Locke Lamora and the rest of the Gentlemen Bastards, go read the first two books. They are incredibly fun, entertaining, and clever; plus, if you read The Republic of Thieves first, you'll spoil many of the earlier surprises.

I received a review copy of this book from Random House Publishing Group in exchange for an honest review.
Posted by Scott at 8:19 AM