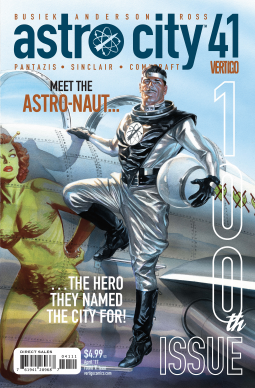 From  the publisher: It’s our 100th issue celebration! This 40-page extravaganza introduces Astro City’s most revered hero—the Astro-Naut! Learn his secrets! See him in action! And in the heat of World War II, see the stunning sacrifice that inspired a grateful populace to rename a city after its greatest hero. Also featuring the All-American, the Lamplighter, Zootsuit and the debut of the Gentleman, as our tour through Astro City’s history continues!

I love Kurt Busiek's Astro City series. With a somewhat sporadic publishing history, it's hard to keep up with it's many incarnations, but I try to read it whenever I discover a new arc. So, I was surprised, but not really, to discover it had reached it's 100th issue (from all publishers). To commemorate this feat, Busiek delivers an extra long issue.

Astro City #41: The Sky's the Limit details how Astro City got its name, and the hero it was named after, the Astro-naut, Roy Virgil. While he wasn't the first hero, he was arguably Astro City's first great hero, and he came along at a time when heroes were in desperate need: the end of the Great Depression and the beginning of World War II. With his scientific and creative mind, he was able to defeat many villains, as well as travel throughout the galaxy. The Astro-naut also inspired a new bevy of heroes, leading to Romeyn Falls to be renamed Astro City.

Busiek has used Astro City to tell a different kind of story about heroes and villains, often from the viewpoint of the common man. This issue is no different, as the story of Roy Virgil is told by his friend, Joseph Greenwald, city councilman and eventual mayor. Greenwald's perspective is an excellent prism with which to view Roy Virgil. Virgil himself has some echoes of Tony Stark (Iron Man), but unlike Stark, Virgil refuses to give or sell his technology to the military. This causes some of the conflict in the story, but with Greenwald's observations, the reader is given a fair look at the Astro-naut.

Throughout his long run telling Astro City stories, Busiek has created a deep and well-rounded world, with plenty of history to explore. At its worst, Astro City is a fresh take on some familiar tropes. At its best, though, Busiek leaves his readers with not only a unique tale, but an emotional and thoughtful one as well. The Sky's the Limit is an example of the later, and is an excellent addition to the Astro City legend. I highly recommend Astro City #41; it is a fine one-shot and a terrific glimpse into what Astro City has to offer. I would also recommend any and all of the collected volumes. You won't be sorry.